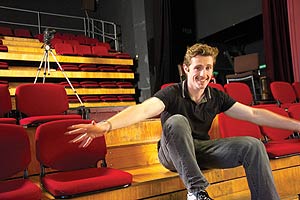 Scott Ransom discovered there's a place for students with a love of writing and a penchant for the absurd. It's called Theatre Studies at Otago.

Scott was drawn to Theatre Studies because, he says, "It offered a bit of everything"- writing, reading, acting, directing. Over three years, the University's Allen Hall Theatre became Scott's second home, where he took part in 35 plays.

These days Scott is getting to put on a funny moustache and call it a job - he is playing the role of Groucho Marx in Flywheel, Shyster and Flywheel, a performance he is planning to take to the Wellington Comedy Festival. Plus he's rehearsing a Charles Ludlam play, Stage Blood, for a season at Dunedin's Globe Theatre. But he says, looking back, what stands out was having "the space and freedom to play."

For Scott, this meant discovering more about his personal style as a playwright. In one work he held five simultaneous performances in the theatre. The audience roamed around and took in a bit at a time, "with each play adding to a bigger overall message."

"My work always had this surreal, humorous quality and often explored issues around identity and personality, and I enjoyed studying writers such as Woody Allen. I love the way his work set up these situations, then finished with a punchline."

He remembers co-writing a play with a friend about a private joke between them. "I was reading the script and thinking, 'Is this funny? What is this?' But the audience laughed, so it must have been a comedy!"