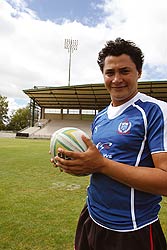 Within a year of graduating from Otago with his LLB, Garrick Cowley found himself on an international stage facing his biggest legal challenge. Two of his fellow Manu Samoa teammates were facing suspensions for on-field indiscretions while playing England. Garrick was required to combine his roles as a lawyer, and a rugby player in the Samoan National Rugby Team, to represent his teammates before the International Rugby Board's Disciplinary Committee.

"There were three of us on the Samoan team with law degrees. So while the English players were being represented by Queen's Counsel lawyers, the three of us acted as our teammates’ defense counsel. We were able to knock-off half of our teammates’ terms of suspension and I’d have to call it my legal highlight," Garrick recalls.

Through his work with PILSA, Garrick helped Pacific Islands students prosper in the law program. "Our role was to assist first-year students gain acceptance into the law program. We gave students study resources, ran tutorials, and helped with any needs."

Garrick quickly found a place to use both his LLB and Commerce degrees after leaving university when the commercial Rotorua law firm Davys Burton recruited him.

However, Garrick’s other career as a professional rugby player was still calling. He was picked up by both Bay of Plenty and the Samoan National Team. "At the moment I’m concentrating on rugby, but it's important to have degrees to fall back on and to build my career in the future."