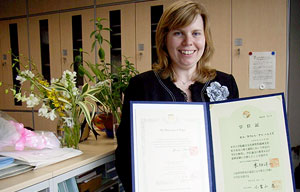 After graduating in 1995 with a BA in Japanese and English, I completed a Postgraduate Diploma in Japanese in 1996, and I now teach English and New Zealand Studies at Kanagawa University in Yokohama, Japan.

I had felt an affinity for Japanese language and culture ever since high school, so it was perfect timing when the Japanese Programme was established in 1993, the year I began my studies at Otago. My Japanese major offered me comprehensive language training and knowledge of history and culture, and the commitment of my teachers stimulated my interest in Japan even more.

The timing was right again in 1996 when I became the first Otago student to participate in the AIKOM exchange programme with the University of Tokyo. This opportunity changed my life: after AIKOM, my Otago sensei supported me in my application for a Monbukagakusho (Japanese Governemnt) scholarship, and I became an MA candidate in the Comparative Literature and Culture programme at the University of Tokyo. In 2006 I gained my PhD, in which I was able to combine my love of both my home country and my adopted country through a comparative study of the writers Janet Frame and Ohba Minako.

Looking back on my days at Otago, the open atmosphere of my Japanese classes stands out - language learners often feel self-conscious about baring their fledgling skills in front of their peers, but I was always made to feel relaxed and received plenty of encouragement. I flourished in that environment, so it's something that I work hard on recreating in my own classes now! My Japanese major really did prepare me well for my life and career in Japan.