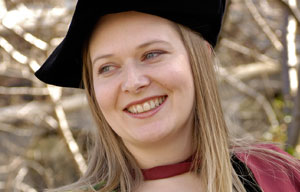 Vickie Saunders obtained a First Class Honours degree in Linguistics at University of Otago in 1998. She also studied French, German and English literature. Vickie had very much enjoyed learning foreign languages at high school and had been intrigued by how and why languages vary in their structure and change over time. Linguistics was the perfect major subject for her - it provided answers to her questions and challenged her intellectually, while also providing real practical skills for language analysis and language learning.

After completing her BA (Hons), Vickie spent a year in France on a working holiday. She was able to put her language skills to good use, travelled all over France and tried a variety of exciting jobs: work on a cruise ship in the Mediterranean, work in a bar in Paris, and picking grapes in Bordeaux.

As an undergraduate in the Linguistics Department Vickie had developed a keen interest in the cognitive underpinnings of language. After her year in France, Vickie returned to Otago and completed a PhD in Psychology in 2005 on language deficits in neurological populations.

Vickie now works for the Ministry of Foreign Affairs and Trade as a Policy Officer/Diplomat. She travels all over the world to promote New Zealand's foreign policy and trade interests. Her career will involve work in Wellington as well as posting of two to four years to New Zealand's High Commissions and Embassies.

"I very much enjoyed my time in the close-knit Linguistics Programme at Otago. The communication and analytical skills that I developed during my Linguistics studies, combined with an acquired learning aptitude and enthusiasm for learning new languages, are invaluable tools in my present role."