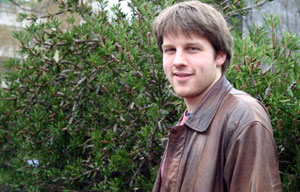 Adon's interest in Music and Music Technology began in high school, where he taught himself guitar, piano and drums. He discovered Sibelius, software for composing music, and became quite proficient with it, which helped with his first year Music Technology paper. Adon completed his Bachelor of Music (Honours) with a minor in Music Technology and then went on to do his Masters in Composition (Studio Production).

Adon is the lead synth player in Dunedin '80's style rock-group, The DFenders, who recently released their debut album. "While it definitely helps to be a performer, you don't necessarily have to be able to perform to be a good producer," he says. "I am living proof of that!"

Adon believes that the Music Technology papers provide useful tools for composers, producers and sound engineers. The papers include experience with industry standard software for composing, recording and producing. They also cover the mechanics of recording, processing, studio engineering and producing; from setting up microphones to using equalizers to get the sound you want. Adon says that these tools are just as helpful for classical musicians, who could create accompaniments for their performances or compose their own music and be able to listen to what it might sound like.

"I wanted to write and record an album the way albums use to be recorded... Nowadays albums are so mass-produced and over-produced, it is important to be able to keep the authenticity of the sound, to know when to stop tweaking it."

"There's a lot more freedom if you can do it yourself, otherwise producers tell you what to do; plus it's cheaper."

Adon is continuing his education in the music industry, as he learns how to make a music video!