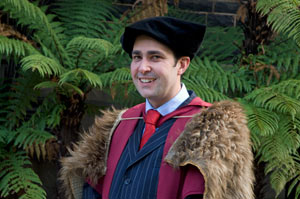 Time takes on peculiar qualities for many PhD students, and for Michael Stevens perhaps more than most.

His thesis, largely on the history of his family’s muttonbirding practices, took him from the 17th century, prior to European contact, to reflecting on his own behaviour on his family’s Titi Island in Foveaux Strait.

While most muttonbirders have long forgone poha-titi (kelp bags) as the way to store their catch, opting instead these days for plastic buckets, Michael’s family have not given up this practice. For Michael, who has been muttonbirding nearly every season since he was two, this detail of family history became a launching pad for asking larger questions about Kai Tahu Whanui and the nature and consequences of culture contact and change in southern New Zealand.

Time, clearly, was at issue. And despite being formally acknowledged by his examiners and thus the Division of Humanities as having produced an “exceptional” thesis after his nearly five years of work, Michael believes if he had taken another six months, “it could have been really good”.

In the next breath, however, Michael describes his main regret as “that I took too long – I was paying fees, not earning a salary, and I missed out on an earlier postdoctoral opportunity.”

Michael agrees that the tension between producing excellent work and letting go is fundamental to the PhD process. For him, a moment of confidence-boosting clarity came at a history workshop he was fortunate to attend at the University of Manitoba in 2008, along with postgraduate students from the world’s best universities.

“I was pleased to realise that I understood what the other students were talking about, I could contribute usefully to their work, and that my work held water at that level.”

Trusting in your thesis is also largely a matter of trusting in your supervisors. Due to the comings and goings of academic staff over the period of his study, Michael had supervision from three, all of whom he praises for their different, but important contributions.

“My main supervisor was excellent at ensuring I maintained my momentum, and stayed on track to actually produce a thesis. Another was enormously well read, encyclopaedic even, and would point me in the direction of essential readings and schools of thought. He also has an infectious enthusiasm for our type of work. My other supervisor was on board for just a short time, but she gave a very close reading of my draft thesis and made extremely valuable comments at a critical time.”

His advice to new PhD students: “Focus your question and your frame of study as soon as you can, and keep it as tight as you can”. Time can easily slip away by being overly ambitious, he believes. “I probably only used about 15 per cent of the literature I read!”

On the other hand, Michael believes his broad-based knowledge bore fruit when he came to write up the thesis. “I knew several fields very well by this point. I was confident about my ideas and how they fitted into the broader discipline. When I look back on some of my notes from my earliest readings, it’s interesting to see the things I had highlighted and what I had ignored – I had definitely changed a lot. I’ve come a long way.”