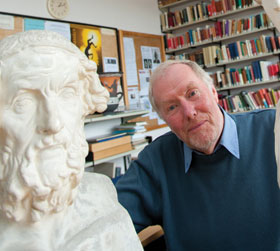 “Video games are full of Spartans. Hercules and Xena have their own TV shows. They are great characters and great stories.”

What do Harry Potter, Jesus and Superman have in common? Great mystery surrounds their parentage and birth, they are in possession of extraordinary powers, and they each face adversity in pursuit of great missions. And according to Dr John Garthwaite, lecturer in Greek Mythology in the Department of Classics, they all belong to a tradition of gods and heroes that has existed perhaps as long as humans have told stories.

Knowing about our ancient heroes, John believes, is part of understanding the stories and characters that surround us. “Greek heroes permeate our culture.”

He doesn’t just mean this symbolically, with ancient gods helping us understand ideas of power and virtue. Greek figures have, quite literally, been showing up in Western art and literature since the Renaissance, “Video games are full of Spartans. Hercules and Xena have their own TV shows. They are great characters and great stories.”

And while the idea of the hero lives on in the likes of Luke Skywalker and Superman, John points out that Greek figures were often more ethically ambiguous than their modern equivalents. “Hercules killed his children in a fit of madness. Oedipus killed his father and married his mother. There are no simple dualities of good and evil, and that’s part of what makes them so interesting.”

Indeed, the rich ideas contained in classical thought remain relevant in many disciplines. John’s own research has focused on how writers living under brutal Roman emperors, such as Caligula and Nero, managed to sneak some veiled political criticism into their work. “It’s an issue that still faces those living under dictatorships today. How do you manage to criticise a regime and escape with your life?”

Similarly, students from all across the University – including Health Sciences, Psychology, Anthropology and Law – incorporate Classics papers in their degrees. “Not only do they comment on the links they find with their other subjects,” says John, “they love the new areas of knowledge Classics opens up for them.”