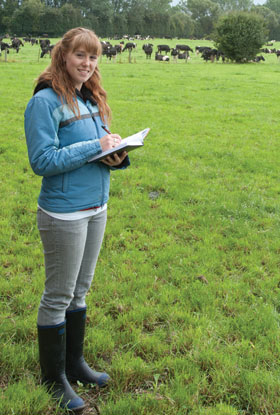 “Human geography was the degree that offered the broad combination of economic, political and social issues that I was looking for,”

Having spent much of her childhood moving between China, Mongolia and New Zealand, Rachael Lander grew up with a heightened awareness of the many different cultures that make up the world we live in.

So studying human geography, with its focus on the interconnections and interactions between people and their environments, was an obvious choice for Rachael, and one she says she is glad that she made.

“Human geography was the degree that offered the broad combination of economic, political and social issues that I was looking for,” she says. “It presents a really good theoretical articulation and overview of the issues that are facing our world, and enables you to see these issues from a range of different perspectives.”

Rachael cites a weeklong field trip she and her classmates took to Reefton, where they interviewed local farmers, environmentalists and other interested parties about dairying and its effects on the local economy and on the environment.

“The trip to Reefton was a real highlight for me,” she says. “It was great to be able to get really hands-on and to spend time talking to real people about the issues that matter to them.”

Rachael’s Otago degree also includes a Chinese Language minor. But, even with all of the cultures that she has been exposed to through her travels and studies, Rachael says that Dunedin’s has something unique to offer.

“The student life is vibrant and there’s a real sense of community,” she says. “It’s also a progressive city, so if you’re interested in issues like social justice you’ll meet a lot of people who share your interest.”

After graduating, Rachael plans to travel to Switzerland and complete a master’s degree focusing on children’s rights – ensuring that both her interest in new cultures and her passion for social justice continue to flourish.