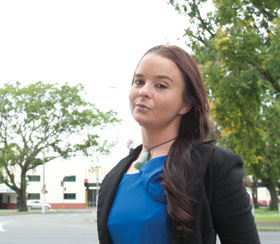 She thanks the “amazing mentors and supporters” at the University for believing in her.

When Stacey Gullen-Reynolds left school at 15 having passed only one School Certificate subject, it was hard to imagine that one day she would be handing out education and career advice to others. But it’s due to this experience she says she can identify with a wide range of Māori and Pacific Island youth she meets as a kaitohutohu, working for Career Services, the crown agency which provides free impartial career advice.

Stacey certainly knows how daunting returning to education can be, especially if your experiences at school weren’t great. Her initiation back into education began with Te Whanau Arohanui, a programme she completed after leaving school. “The tutors there encouraged me into higher education and supported me through that transition.”

This led to a course in Te Ao Māori, which gave her the confidence to try university study. It was a shaky start – after her first year, Stacey returned to the workforce. But when she finally decided she wanted a degree, motivated by her desire to “support Māori in every way possible” she let nothing stand in her way. She studied full-time while also working, achieving an honours degree in Māori Studies.

Stacey’s Māori Studies degree also included papers in Community and Family Studies, and she became fascinated by the Treaty of Waitangi and how it operates in practice, for example, in the criminal law system.

And she thanks the “amazing mentors and supporters” at the University for believing in her. “There were two lecturers in particular who kept an open door policy for me. They were brilliant at drawing out my ideas, and helping me express them in writing.”

Now, Stacey is herself in a position of “helping people follow their dreams”.

“Often you will ask a teen what kind of job they want, and they’ll say, ‘I don’t know. Whatever.’ But if you ask what they wanted to be when they were children, they will remember that they had wanted to be a fire fighter, or a vet, or something else. It’s about rekindling that imagination, talking about all sorts of professions in related areas, and helping them take the steps they need to achieve those goals.”