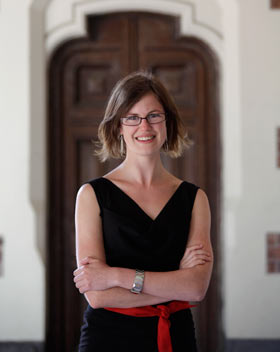 Following her passion to study Philosophy gave Rebecca Thomson an edge when it came to her career.

Rebecca combined Philosophy with Politics and Law, graduating with a BA (Hons) and LLB (Hons).

Straight from University, she landed a sought-after contract as a Judge’s Clerk at the Supreme Court in Wellington.

At the end of “a brilliant two years” she gained a position as a District Court criminal prosecutor in Auckland.

Both jobs involved rigorous selection processes, and Rebecca believes her double degree was a factor in her success.

“Because so many people do law degrees these days, having another degree is a huge bonus in the eyes of an employer.”

“If anything, doing Philosophy was the best combination with Law that I could have had. Philosophy teaches you a method of thinking.”

“You learn about theorists and what they said in the past, but the focus is always on what your response is to what they said and how you phrase that in a way that makes sense to other people – which is obviously a hugely important skill for law, and politics as well.”

“I tutored for the first year paper on critical thinking, which was such an advantage too, because it’s all about how you structure arguments.”

Doing a double degree doesn’t have to limit your social life, says Rebecca, who recommends the activities available through clubs and societies.

“You feel study will take over 24/7 but you actually have more free time than you might think.”

“Take advantage of all the opportunities to do interesting things that you won’t have after you leave. You can enjoy making a fool of yourself occasionally as a student but it’s not such a good look when you’re a criminal lawyer!”