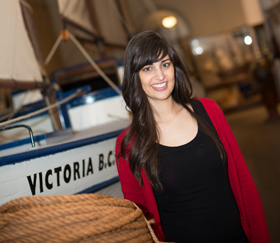 As a child growing up in Auckland, Shalini Kennedy fell in love with museums and ancient history, so she decided to study Classics at Otago.

“Ever since I visited the Auckland War Memorial Museum on a school trip, I knew I wanted to work in a museum. I knew Classics could get me there in an enjoyable way,” she says.

“I was attracted to the fact that Classics is an interdisciplinary degree that covers two millennia and multiple countries. You can take classes ranging from pottery and sculpture to literature, philosophy and languages.”

“I didn’t know anyone when I got there, but I made friends immediately – friends that I still have to this day. There was always something going on and I loved it.”

She loved the Classics Department too.

“You might think you’d have to go overseas to study Classics but the department is world class. The lecturers are awesome, their classes are interesting and the entire department is incredibly supportive.”

“I’d previously worked with children during summer camps, and had worked as a tutor at the University. In the process I realised I really enjoyed teaching.
“At the museum I could combine my love of working with ancient objects with being able to interpret them for people. Dream job accomplished!”

When Shalini’s husband — they met in the Classics Department — found work in his native Canada, Shalini gained a position as Programs Co-ordinator at the Maritime Museum of British Columbia.

“People ask how I could apply a degree in Classics to working with boats and maritime history, but my degree was broad and the skills I gained were easily transferable.