After graduating with a BA(Hons) in Communication Studies from Otago, I moved to the New Zealand Broadcasting School in Christchurch to study journalism. 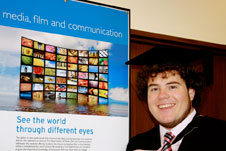 Two years and thousands of earthquakes later, I was approached by TV3 to start up the online news operation in Wellington and at Parliament.

I leapt at the chance, moved north and have never looked back. I’ve covered some big stories, including the Rugby World Cup, the elections, numerous murder trials and the demise of a number of politicians. My role also means I’m at the forefront of predicting the future of media consumption in a landscape of volatile platform convergence.

I work with some of the country’s most experienced and renowned journalists for New Zealand’s biggest multi-media company – my future is bright and Otago is where it all started.