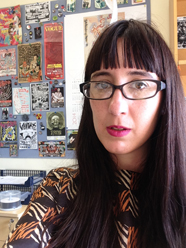 Dr Rosemary Overell’s research ranges from extreme death metal music in Japan to how ‘hoarders’ are represented on television.

Rosemary looks at how everyday life practices – whether they be in music-making, shopping or just watching TV – work in broader socio-cultural contexts.

After completing a BA Honours in cultural studies at the University of Melbourne, she completed a PhD on extreme metal music in Australia and Japan. As part of her research, Rosemary lived for two years in Osaka, Japan, conducting fieldwork on the extreme metal scene there. Her work has now been published as Affective Intensities in Extreme Music Scenes: Cases from Australia and Japan, by Palgrave MacMillan.

Coming from a cultural studies background, Rosemary’s work ranges across a number of humanities disciplines, including sociology, Asian studies and gender studies. Her PhD thesis looked particularly at how Australian and Japanese men experience belonging in local, and national spaces through their engagement with extreme metal music.

After teaching at the University of Melbourne for five years, Rosemary moved to Otago to take up a lecturer position in the Department of Media, Film and Communication.

Her inter-disciplinary background means she has taught a varied number of papers, both here in Otago and at the University of Melbourne. She is particularly interested in grounding critical theory in everyday popular cultural contexts. This makes it easy for students to connect with subject materials, but also enables them to be critical of ‘normal’ practices, events and products. As part of this endeavour, Rosemary regularly writes on popular cultural phenomena – such as celebrity, cat cafes and gender – for theconversation.com.

Rosemary is also a keen advocate for the incorporation of new media technologies into assessment. Most recently, she has implemented blogging assessments as a way of getting students to apply theoretical ideas to their own lives.

Currently, Rosemary is working on two projects. The first extends her PhD research to account for how nikkeijin (Japanese-Brazilians working in Japan) relate to Japanese national space through their experiences in extreme metal music. The second focuses on reality television programmes and how these generate particular emotional responses in viewers.