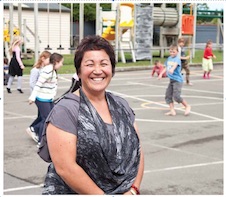 When Charlotte Payne decided to enrol for the Bachelor of Teaching Primary Bilingual Education, it was a big decision for a wife and mother of two to make. After eleven years working as a courier driver and in the office, studying would mean a financial struggle for her family for three years, but she decided that if she wanted it enough she would get there, and with the strong support of her husband she backed herself and went for it.

She had developed a driving passion to become a teacher after coaching her son’s rugby team. "I loved building relationships with the children and watching their reactions when they achieved something. I really became passionate about teaching."

"At College I was in a small class and tutors became friends too. We were a really close knit supportive whänau. I found the learning hard but I pushed myself to do it. The teaching practice was so emotionally and mentally rewarding that it always provided me with renewed determination to succeed.”

Although she was not fluent in Te Reo, Charlotte chose the Bilingual stream as she wanted to develop her own knowledge and share it. At College she acquired basic knowledge of instructional tikanga, she says, "enough to introduce to children but not to bombard them with it." In her first teaching year at St Joseph’s Primary School in Invercargill, Te Reo and tikanga became the tools by which she and her year 3 and year 4 children bonded: together.

"I taught them some basic words and greetings but I always put them to music to make it fun. They loved it! And I was beaming! Their interest grew and together we were motivated to form a very successful Kapa Haka group, which performed at Polyfest, and were invited to perform for various local audiences. It was fantastic and the kids grew in confidence.

"I look back and think 'wow, what a huge four years I’ve had'. At times it felt like I was taking little steps but at the end of my degree I had taken big steps. And now I am out there teaching and I love it. Every day I am challenged but I know that the amount of effort I put into my work will always be equal in measure to the rewards."