The value of te reo Māori 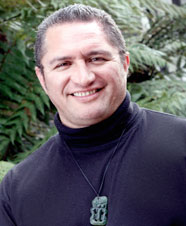 In one project Poia is working alongside Victoria University’s Professor Rawinia Higgins helping raise the awareness and value of the Māori language in Aotearoa; this includes focusing on how central government might develop practical, workable policy for the growth of Māori as an everyday tool of communication within government departments.

“There is a gap in language acquisition and maintenance,” Poia says. “Outside of your family, your work place is the most influential on language use, so it makes sense to introduce the Māori language there. The theory is that we develop common Māori language practice in government departments and that will flow on to other work places.”

In another project, Poia is particularly excited by his partnership with Otago Senior Research Analyst Dr Katharina Ruckstuhl, working on Māori language resources to assist local whānau in their language journeys as family units. As a result a phone app offering Māori language vocabulary learning is due for release this year.

“The Māori language needs to be given a valued status and awareness of the language has to be increased. I do everything I can to remove barriers and provide enablers,” Poia says.

His 2010 book Whaikorero: The World of Māori Oratory won the NZ Society of Authors E H McCormick Award for the Best First Book of Non-Fiction in the New Zealand Post Book Awards and has been used as the basis of a documentary on Whaikōrero.