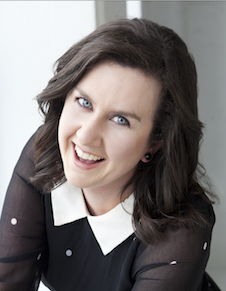 Jackie Shaw has achieved a great many things since completing her Bachelor of Arts (Hons) in Theatre Studies at Otago University. She co-founded her own theatre company with a fellow graduate, before taking a scholarship to Neighbourhood Playhouse School of Theatre in New York to study the Meisner technique, which was first introduced to her by Hilary Halba during her time at Otago University.

Next was a stint in her hometown of Queenstown as a Speech and Drama teacher, which had her pulling out her old Theatre Studies notes for warm-up exercise ideas.

A year-long investigation into documentary theatre in her final Theatre Studies year at Allen Hall was what inspired her to get her theatre company off the ground. Her company's most notable work was 'MUNTED', a verbatim play about the Christchurch earthquakes, which saw sell-out seasons throughout NZ, a standing ovation in Los Angeles, and even included taking the work into schools and a prison.

"I would have had no idea what documentary theatre was without my time at Otago, it was a whole other way of performing, but also a whole new way of getting stories heard, and it taught me the importance of ethics."

A big highlight, and a main reason for choosing Otago, was Allen Hall Theatre and the Lunchtime Theatre programme. "It's such a great way to try new things and experiment without the risk of failure you have in the real world- I never thought I could direct a show, but through Lunchtime Theatre I had the platform to do this."

"Otago had a great mix of practical skills and theory and you knew you were getting taught by the best. All the lecturers have been (and some still are) in the industry, continuously developing themselves. The small team meant you got to know them on a personal level – you could go to them with any questions and they were happy to help, always having your back."

Jackie is now contracted in the TV Production industry, at Sticky TV, as well as a registered Marriage Celebrant, both of which she says draw on the skills she gained during her degree.

"It can be really hard to find work in the arts, so be open, take the risks and create your own work. My time at Otago was a great stepping stone in the right direction."