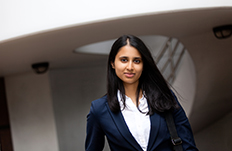 Business student Amanda Navaratne has had international work experience and substantial job offers, all before she has even finished her double degree.

She credits her success to the Otago Business School Internship Programme, which kick-started her career at the end of her second year studying for a BCom (Economics and Finance) and BA (Politics).

Growing up in Queenstown and Dunedin, Amanda had formed a keen interest in business long before her Columba College team won the Otago Regional Young Enterprise Scheme and prizes of Otago Business School scholarships.

Despite her scholarship, Amanda’s desire to gain independence and broaden her horizons led her to study in Auckland instead.

A year later, homesick and wiser, she returned to Otago. “I’d discovered my true areas of interest — public policy, government and economics. Otago accommodated my request to change courses by cross-crediting my papers and providing me with the advice I needed to make the transition.”

The Business School arranged her first internship in Auckland, after which a role in the firm’s Sydney-based consulting division became available. “It would’ve been an incredible opportunity but finishing university was my first priority.”

At the end of her third year, she landed a three-month management consulting internship in Sydney, which was extended to eight months and a full-time position when she graduates.

She believes the Otago Business School distinguishes itself from other tertiary institutions in New Zealand because of the opportunities available through its Internship Programme.

“The projects I’ve worked on during these internships have enabled me to collaborate with some extraordinarily intelligent, inspiring individuals.

“I would not have been able to do it without the support and mentoring I’ve received at Otago. I feel incredibly fortunate.”