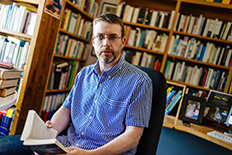 Professor Liam McIlvanney
Co-Director, Centre for Irish and Scottish Studies
and a member of the English and Linguistics programme

Professor Liam McIlvanney has accolades not just for his academic work, but also for crime fiction.

His study on Burns the Radical: Poetry and Politics in Late Eighteenth-Century Scotland gained the Saltire First Book Award in 2002, and in 2014 he won the Ngaio Marsh Award for Best New Zealand Crime Novel with his second thriller.

“Reading and writing are two aspects of the same activity,” says Liam. “If you want to study literature you have an advantage if you write.”

Liam is one of a number of lecturers in English and Linguistics at Otago with a passion for creative writing. They offer papers which include poetry, crime fiction, travel writing and non-fiction writing.

He studied at his native Glasgow and at Oxford and taught at the University of Aberdeen before taking up the inaugural Stuart Chair in Scottish Studies at Otago.

The University, Dunedin’s Scottish background and excellent writers were an attractive combination.

“Dunedin is a city of literature with a strong literary pedigree. And many people have vital connections with Scotland. There’s a real depth of local knowledge. It’s not just heritage.

“I couldn’t have picked a better place to study the impact of Scotland in a global sense. And it’s a bonus to live in a proper university town.“

That includes examining how identity is constructed and reflected, not just in factual migrant journals and shipboard diaries, but also in novels, stories, poems and plays.

Liam is currently tackling two new novels, one set in Glasgow, and one in Dunedin.

Otago living makes it easy, he says. “It’s hard to get too stressed when you are surrounded by so much natural beauty.”