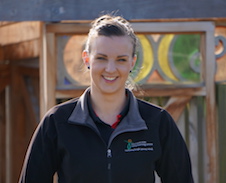 Leesa McKay always had a passion for young kids but having her own really prompted her to pursue early childhood education as a career.

“I thought I knew what I was getting into but when you start studying you realise how many different layers there is to teaching young children. You learn to understand who they are as young learners."

"While studying I gained valuable and in-depth knowledge and understanding about how important teaching and learning are in those early years. The amazing lecturers were so full of knowledge; they presented information in a way that was understandable and made you want to learn.”

Having a young family made studying a big decision for Leesa, but one she has never regretted. It required good time management skills but was definitely “do-able”.

“I was more into sport at high school and the idea of studying later in life freaked me out a little bit - but I’m so glad I did it. I started studying the same year as my daughter started school, it was a challenge but the Southland Campus made it as easy as possible, they were really family friendly."

"I think a lot of people are put off studying later in life but if you have that passion, you should just do it. You’ve really got nothing to lose and everything to gain."

“The support is just incredible and being an ‘older’ student was never awkward. There was a mix of students, both older and younger than myself; age just didn’t matter."

It was this whanau approach and tight-knit community that Leesa enjoyed most during her time.

"I liked that I was surrounded by like-minded people, who had the same goal but still challenged each other with creative and critical thinking, and I have made friends for life.”

Leesa counts herself lucky – the early childhood centre where she did her third year placement had a job opening at the conclusion of her study so she was able to apply and go straight into full-time work after graduation.

“It’s a big transition from studying to working but my third year practicum was where I was able to be the teacher with the support of my associate teacher, this made it much smoother. I already had the experience and relationship with the children so I was able to hit the ground running.”

“Studying was one of the best choices I’ve made, early childhood education is an awesome career and all I can say is I wouldn’t change it for the world, I may have finished studying but my learning journey is far from over.”