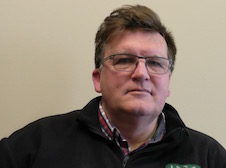 Few people start a PhD without a plan for when it’s finished, but for Del Carlini it was the adventure of learning that drew him to a PhD in politics at the University of Otago.

“My wife and I were running a busy public relations company and I was involved in a lot of business strategy, but after 17 years we both felt we wanted an intellectual refresh.”

Having studied science, economics and journalism in his earlier years, a long-held interest in military strategy seemed like a good focus for his return to academia. He wanted to go as deeply as he could into understanding strategy.

Del was originally going to focus on population-centric counterinsurgency - the strategy of capturing the hearts and minds of a population so they support a war effort against an insurgent enemy. But that changed as he mapped out the timelines of the Iraq and Afghanistan wars. He realised it was not the end strategy (population-centric counterinsurgency) that was the interesting part; rather it was the fact a new strategy was needed in both conflicts.

“From a military point of view, the US war-planning for the Iraq invasion was thorough, but after the initial entry it turned into a fight they didn’t understand. However, as they started to learn from inside the conflict, the American military recognised the need to change strategy.

“My argument is war is a progression of three acts: the first act is about pre-conflict planning, then the second act begins as the conflict begins; usually this is quite different from what was planned for. It is from within the conflict that the style of the fight eventually becomes understood and a new strategy is promoted. A third act begins when a new strategy is constructed – it doesn’t mean a guaranteed win but the conflict will be more understandable and therefore more manageable.

“The second act is crucial – it’s about how quickly an armed force can learn and adapt to the war they find themselves in. One of the key theoretical underpinnings to come out of my thesis is that warfare is co-evolutionary: I attack, you learn, you adapt and then I adapt in response to what you bring to the fight that is new. It’s a constant co-evolutionary dance. Your enemy teaches you how to fight.”

The core question of Del’s thesis is what enhances the ability of an armed force to adapt during conflict and what slows, disrupts or hinders that ability.

“A key issue is the politics and bureaucracy. Often politicians will say ‘this is why we are going to war and this is what we will be doing'. But such pre-conflict commitment limits a soldier’s ability to adapt to the co-evolving war they find themselves in. As the conflict goes on, it will evolve but policy positions tend not to, so there is a progressive disconnect between what an armed force in combat needs and the policy that took them to war.

“Military forces are being required to be endlessly agile and adaptable in complex modern warfare. What comes out of my research is that if a government is asking military forces to be adaptable then can a bureaucracy that oversees their activities be capable of adapting to the needs of the co-evolving combat situation? Is our political decision-making as adaptable as the military force?”

Del may have set out simply for the adventure of learning but he has been amazed by how much he has loved the academic side of things, the ability to analyse and gain an in-depth understanding of the geo-political landscape using strategic theory.