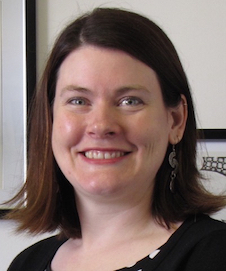 In spite of a strong interest in history when she was in high school, Gwynaeth McIntyre says "I almost failed history in school". A lack of good history teachers coupled with a focus on names and dates in her assessments left her uninspired.

Fortunately for us, Gwynaeth discovered Classics at university. Now she teaches the first year Greek Mythology paper, the Latin papers and a 300/400-level paper From Augustus to Nero: Scandal and Intrigue in Imperial Rome.

Gwynaeth went to university to do a degree in biochemistry and microbiology, as she had gravitated towards maths and the sciences at school. In her second year she took an Ancient Greek paper as she thought it would help her memorize scientific names and terminology. "I absolutely loved it, and realised that I did not have a passion for science." Gwynaeth then went on to take a variety of papers in the humanities.

"I had an amazing lecturer for Roman history and that’s what got me 'hooked' and made me want to learn more about Roman politics and religion. I learned that history is so much more than names and dates; it’s about people and events, and following broad trends in thoughts and attitudes.

"I think of history as tipping points or spikes. It’s so much more than just a series of isolated events. For example, the Ides of March (the date that Julius Caesar was assassinated) was a culmination of the political conflicts and upheavals that had plagued the Republic for almost 100 years and as a result, political players took advantage of the power vacuum through a series of civil wars which ultimately led to a new form of government being established."

Gwynaeth believes we can learn a huge amount from the Greeks and Romans, not only about how past cultures developed and thrived but even about ourselves.

"What I try and do is to give students two different perspectives of the same narrative so that they can see that one is no more right or true than the other; that each is discussing the same event in different terms. If you start questioning why ideas are being presented in certain ways then you can get into the minds of the people who are writing about their past and develop understanding and empathy.

"Personally, I love the politics, the intrigue, the murder and mayhem of the Roman imperial period. The drama almost makes it feel like I am teaching a movie script or TV show. Yet, it also gives students a chance to see how ancient societies presented their own history and identity and how these texts, images and ideas shape our perceptions of our own history and identity.

"For the myth class we always have a little movie break on Mondays where I find a pop culture reference to the myth that we are talking about, so that students can see how we are taking these narratives and making them our own. How we might change narratives to suit our purposes. This can be very political and very relevant in addressing issues for us today."