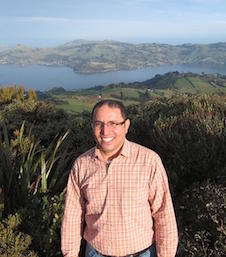 Mutahar Al-Murtadha arrived in Dunedin four years ago to complete his PhD in Linguistics, which focused on second language learners’ motivation and willingness to communicate.

“I was drawn to Otago for my supervisor, Anne Feryok; she is one of the few academics with expertise in this area. Right from the start she was very welcoming and helpful with my application and proposal.

“I don’t think I would have found a supervisor like her at a different university – she really supported me whenever I had difficulties and was very knowledgeable.”

“When people learn a second language, participation is vital in acquiring language skills, but many students lack the confidence to speak. The aim of my research was to enhance their willingness to communicate in English through imagination and visualisation.”

Before implementing an intervention programme, Mutahar conducted three studies to explore and identify the factors that influence students’ willingness to participate in the classroom. Based on the results of those three studies he designed an intervention programme using visualisation to enhance their communication and participation in the classroom.

His study is only the second study ever to try this method – visualisation has been used in other fields, such as with athletes to enhance performance, but not in Second Language Learning.

“Interventions are demanding – it’s difficult to get schools that are willing, and hard to have a strong control group. I was lucky that I had a very good school, which had two language classes at each level. I was able to use one as a control group, and because the groups were homogeneous it makes the validity of my results stronger.”

Mutahar conducted different activities with a class in the rural Yemen high school, exploring the student’s possible selves and imagined communities – asking them to visualise what kind of speaker they want to become.

The students were very engaged in the programme, and Mutahar’s intervention significantly enhanced the learners’ willingness to engage over a six-week period – they enjoyed the activities and it raised their awareness of the importance of talking in a second language in the classroom, not just memorising and listening to the teacher.

It is his hope that his research will lead to more interventions, or at least, using visualisation and ideal selves’ activities in the classroom.

“Some teachers aren’t aware of the importance of this, so if the activities and context of English learning aren’t related to what the students see themselves doing in the future, it might not be effective. For example, a majority of the students in my study wanted to study medicine or engineering, so they needed to see themselves using English in those contexts in order to be engaged.”

Mutahar’s research was complicated by the war in Yemen which started two months after he returned to collect data. He ended up staying there for ten months, instead of six, until the airports opened.

Mutahar graduated with his PhD in December last year and is now working part-time as a culture and language assistant for an educational organization that teaches English as a second language to refugees whilst working on publication of his research.

Having already had some of his early findings published in a reputable journal, Mutahar is working on another publication for the highest ranked ESL journal in the world, TESOL Quarterly.

“It’s very, very competitive – I submitted many months ago, and received positive feedback, asking me to make changes. For a journal of this standing, with acceptance rate of only 8%, that’s really great. If it gets published it’ll be huge, not only for me, but for my supervisor and Otago University.

“It just shows everything is possible – when I began my studies at Otago I never thought I could publish in a top journal but now it is looking possible.”

Department of English and Linguistics