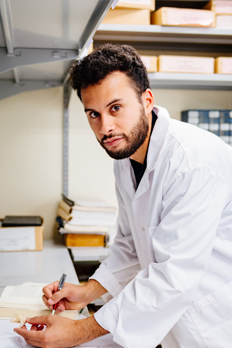 Charles Radclyffe
Bachelor of Arts with Honours
Studying for a PhD

Charles Radclyffe got hooked on archaeology during a gap year volunteering at excavation sites in the UK and in the Solomon Islands where he was born and grew up.

He researched the top universities in the Pacific and chose Otago for the strength of its Archaeology department, but he wasn’t quite as well prepared for Dunedin.

“Coming from Solomon Islands, the climate was a big surprise and I had a bit of culture shock, but I soon made friends at my residential college and immersed myself in Dunedin’s scarfie culture.

“The Pacific Islands Centre also gave me all the support I needed in the early days. It was very comforting to meet the staff and other Pacific Island students and to take part in cultural events and recreational activities.

“Initially I didn’t know what papers to choose but the lecturers were very helpful in giving me advice. Since then it has been a privilege to study at such an esteemed university and learn from such skilled archaeologists, especially those who have been working in the Asia-Pacific region for decades.

“Their support has been one of the reasons for me carrying on studying, especially as I am an international student and the cost of education has mounted up.”

Costs have been eased a little as Charles’ academic record has earned him numerous awards and grants, including the Royal Society Skinner Fund, the Royal Anthropological Institute Emslie Horniman Award, and a doctoral scholarship to study for a PhD.

His studies have taken him around New Zealand and Australasia and allowed him to do ground-breaking research in the Solomons.

“I’ve visited several campuses around the Pacific region. Otago has top quality laboratories, access to special equipment and some of the best reference collections for comparative research.

“Studying at Otago has opened all kinds of doors for me, including allowing me to visit parts of Solomon Islands I would be very unlikely to see otherwise. As a Pacific Islander, I am very proud and excited by the fact that I am able to do research into the prehistory of one of the most biogeographically, culturally and linguistically diverse regions in the world.”

Charles has attended several major international conferences and is continuing to develop a career in the Pacific in archaeological research and culture heritage management and conservation.