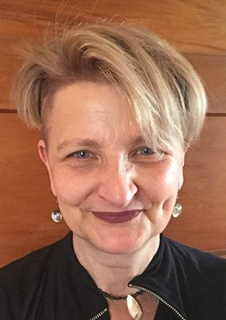 Hilary has studied acting and the teaching of acting at the prestigious Neighborhood Playhouse in New York City, and is one of New Zealand's only accredited teachers of the Meisner Technique. She contributes to international theatre journals and presents regularly at national and international conferences. In 2010, Hilary and Professor Stuart Young were keynote speakers on documentary and verbatim theatre at the “Acting with Facts” conference at the University of Reading, UK. In 2009, she was guest co-editor of the Australasian Drama Studies journal special edition (issue 55), focussing on the theatre of Aotearoa and the Pacific.

She is a founder member of southern bicultural theatre collective Kilimogo Productions, and has directed a number of works for this company.

She continues to investigate the artistic practice of the actor, and has acted through New Zealand as well as in Europe and the USA. She is a founding member of Wow! Productions Trust, a Dunedin professional theatre collective. Hilary has worked on numerous Wow! Productions as an actor, including Dancing at Lughnasa, Twelfth Night, Unidentified Human Remains and the True Nature of Love and Arcadia. In 2010, with Quartett Theatre Company, Hilary completed a European tour of New Zealand playwright Gary Henderson's Skin Tight (as director) and Mo and Jess Kill Susie (as actor). Hilary has also appeared in over 25 professional theatre productions in New Zealand, most recently In the Next Room by Sarah Ruhl, Play by Samuel Beckett and Jumpy by April de Angelis for the Fortune Theatre (Dunedin), Backwards in High Heels by Stuart Hoar for Circa Theatre (Wellington) and Winston’s Birthday by Paul Baker for the Court Theatre (Christchurch). She was named Best Female Performer in the 2012 Dunedin Theatre Awards for her role in Samuel’s Beckett’s Play (Fortune Theatre, Otago Festival of the Arts) and Dunedin's best actor of 2003 by the NZ Listener for her role in Three Days of Rain (Greenberg, USA).

Halba, H. (2005, December). ″I thank thee for not being like other women″: The actor's body and the physical grotesque in Wedekind's Lulu. Verbal presentation at the (Trans)Figuring Bodies: 4th Annual Symposium Cultural Transformations Research Group, Dunedin, New Zealand.

Halba, H. (2009). Poetry, politics and the past: Interweaving Maori postcolonial theatre with Brecht. Proceedings of the 16th Annual Conference of the New Zealand Studies Association. Retrieved from http://www.nzsa.co.uk/conferences.htm

Halba, H. (2007). Torture and Tango: Politics, socio-biology and the dance of intimacy in Stuart Hoar’s Backwards in High Heels. Proceedings of the Australasian Association for Theatre, Drama and Performance Studies (ADSA) Annual Conference. Retrieved from http://www.adsa.edu.au/conferences/past-conferences/2007/adsa2007abstractsandbios.pdf/view

Halba, H. (2006). The past is in front of us: Aspects of bicultural theatre practice in Te Waipounamu. Proceedings of the Australasian Association for Theatre, Drama and Performance Studies (ADSA) Annual Conference. Retrieved from http://www.adsa.edu.au/conferences/past-conferences/2006/adsa2006abstracts.pdf/view