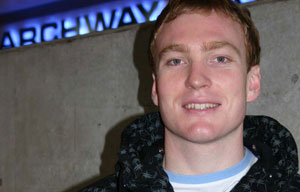 Learning Chinese at Otago has been an enjoyable experience and has worked well with my Commerce degree.

I was surprised how easy it was to learn Chinese as I had previously written myself off as "not being a languages person" after I dropped out of Japanese in high school. I have found that proficiency in a foreign language is a fantastic skill to have. It presents the opportunity to get along better with people from other countries and gain a much deeper understanding of their cultures. I am often amazed how differently people communicate and behave within their own language as opposed to when they use English.

From a career point of view, Chinese Mandarin seems an obvious choice for me. With China's influence growing around the world I am confident I can put it to good use.

For me, the highlight of studying Chinese was my year on exchange to Dalian, China in 2005. I had a great time, my Chinese improved beyond my expectations and I made friends from all over the world. It was like being on an OE, except all the while I was clocking up points for my degree back at Otago. Furthermore, the low cost of living and the support that Otago gives exchange students meant I probably lived better than in Dunedin.

In Dalian I took part in two Chinese speech competitions and in both came out first. That hard training prepared me to win the Tertiary Students Chinese Speech Competition of South Island New Zealand in May 2007. This championship paved my way to China for the world final in August 2007, a ten-day all expenses paid event.