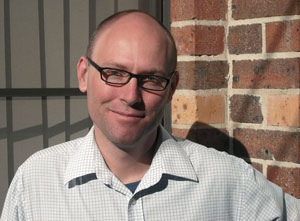 Lecturer of Latin, University of Sydney

Undertaking a PhD in an area with few job prospects was both a help and a hindrance for Paul Roche. “On one hand there was always the question hanging over me, ‘what am I going to do next?’ At the same time, I knew this might be my only chance to spend years properly exploring something I loved. The fact there might not be a job at the end made the time all the more precious.”

Indeed, Paul believes being motivated by the PhD for its own sake was a key part of enabling him to maintain momentum throughout the study. That, and the clock ticking on the scholarship. Paul says he is very appreciative of receiving bridging grants from the University.

On writing a thesis, Paul suggests, “It’s a good idea if you know what a final version of what you want to do looks like. I was writing a commentary on an epic poem by Lucan, called De Bello Civili. So I looked at other commentaries, read reviews of them, and came to understand what was an acceptable level of scholarship.”

And knowing that such works are never perfect, and never finished, Paul adds that he took significant courage from one scholar’s rule of thumb, “When it’s more right than wrong, let it go.”

Beyond that, Paul’s secret to completing the thesis was making constant, steady progress. “I wasn’t too stressed, and I didn’t work all the time. Basically, I showed up most work days, and worked for most of the day. I set lots of tiny goals that meant nothing to anyone else but me. Just things like, ‘I will hand in this section in three weeks’.”

He wrote steadily, allowing his thesis to grow incrementally, noting, “You get much further critiquing something that’s written down in words, rather than an idea you’re thinking about.”

Likewise, Paul’s recommendation for communicating with supervisors is “regularly” especially at the start of the PhD process. “Even if it’s just five or 10 minutes at a time. It’s important to build a relationship with your supervisor, and to establish expectations. That’s done through actually talking to each other.”

Despite Paul’s career concerns, he landed a position at the University of New England, Armidale, soon after the submission of his thesis. He’s now grateful in hindsight for the schooling he received for life as an academic. “I entered this position with teaching experience, publications and good contacts from having attended conferences. My supervisors gave me a lot of practical advice as well.”