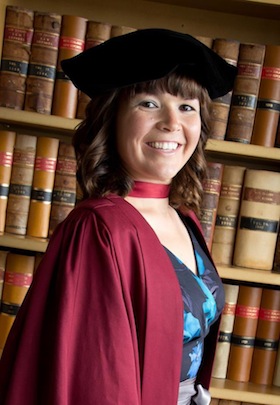 Kia ora, my name is Abby Suszko. I am of Scottish, Ukrainian, Irish, English, French and Tongan descent, and I identify as Pākehā. I have recently completed my PhD thesis, entitled: “The Foreshore and Seabed Debate: Contrasting Visions of Equality and Rights”, and I am incredibly humbled and honoured to be graduating this December with my primary supervisor, Professor John Dawson.

My PhD is essentially jurisprudential in nature and is an interdisciplinary study between the Law Faculty and Te Tumu. I used the Foreshore and Seabed Debate as a case study to unearth the equality and rights arguments that New Zealanders employ today. In exposing those different perspectives, I identified a zone of potential compromise between the differing views, from which a solution to the Debate might be found.

Since undertaking my PhD there has been considerable political movement in the Debate. When I began in 2007, the Labour-led Coalition was still the Government, its position remained largely the same as it was in 2004, and the Debate, while not as fierce as it had been in 2003 and 2004, continued with polar views dominating.

In 2008, a change of Government occurred, and in 2009, the National Party, in coalition with the Māori Party, initiated a review of the Foreshore and Seabed Act 2004. Now, in 2011, there has been a change of law with the passing of the Marine and Coastal Area (Takutai Moana) Act 2011. The Debate, it seems, has moved towards a middle ground, where compromise between some participants’ positions has been achieved.

I took the first steps towards formulating my doctoral research while researching my honours dissertation, “Māori Perspectives on the Foreshore and Seabed Debate: A Dunedin Case Study”. I noticed that many Māori called for ‘one law for all’ to be applied to the foreshore and seabed. This was the same claim I heard from many Pākehā.

From my undergraduate study of jurisprudence, it was clear to me that the claim to ‘one law for all’ was a claim to equality. What was not clear, however, was the aspect of law that should be applied equally, and furthermore, who ‘all’ pertained to. This drove me to examine the Debate at a conceptual level and to seek to uncover the different views New Zealanders hold on equality.

As I was to focus on equality, it was only natural for me to ask John, the Faculty’s expert on jurisprudence and the Treaty of Waitangi, to come on board as my primary supervisor. I was already blessed to have Doctor Jim Williams from Te Tumu, who guided me so successfully through my dissertation, and Jacinta Ruru as my other supervisors. John agreed, and under his supervision, I began my research.

John, while supervising three other PhD students, completing his own research, teaching and applying for his own LLD, showed continued support and dedication to my research and to me personally. He continually challenged me to expand my conceptual understandings and to write at a higher level.

Outside my PhD, John provided me with funding, conference, publication and travel opportunities that made my postgraduate experience productive and stimulating and for which I am incredibly grateful. The trip to Vanuatu to present and moot at the Law and Culture Conference 2010 was a particular highlight. I was extremely happy to see John’s skills as a supervisor recognised when he was honoured as a finalist for Supervisor of the Year in 2010.

As I began to investigate the use of the term ‘one law for all’, I found that it was used to argue for both the recognition and denial of rights. It became apparent, therefore, that different participants relied on different concepts of equality to justify their claims of right or to denounce the claims of others. This led me to enquire into the different sources of these claims of right.

I knew I wanted to investigate the different equality theories New Zealanders expressed during the Debate, whether these theories upheld the notion of separate Māori rights, and what sources of right people relied upon. My dilemma was, however, that I might merely highlight conflicting views, a point already well demonstrated throughout media coverage of the Debate. This would hardly be a positive contribution. To make a better contribution I wanted to use my findings to construct a framework for moving forward, and one that might help quell other similar debates over Māori rights to the nation’s resources.

I wish to thank my supervisors, John, Jim and Jacinta, Dean Mark Henaghan and the Faculty of Law, Te Tumu, the Pacific Island Centre and the University for all the support over my postgraduate years. I am now looking forward to moving onto the next phase in my research journey. I hope to work with Indigenous Peoples in their pursuits for rights retention and recognition, and to contribute positively to the ongoing debates over Indigenous rights by aiding in the creation of more informed public dialogues.