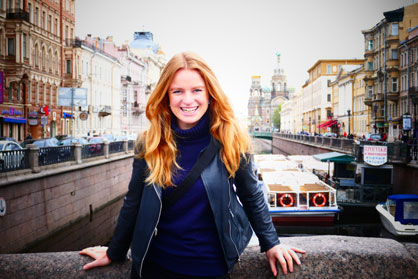 Researching the "stories" of infrastructure projects gives insights into the aspirations of emerging countries, and their drive towards a new world order, says Politics PhD student Carolijn van Noort.

Terminology such as "new world order" often has negative connotations, but Carolijn says the members' aspirations relate to a broad manifesto involving finance, trade, security and sustainable development; BRICS members want increased economic influence and growth in their own sphere, rather than a radical reordering of existing global financial systems.

"In July 2015, for instance, BRICS members established a New Development Bank (NDB) to complement the existing international financial order. These emerging countries are gaining economic weight and want to have more [global] political power. However, the current economic downturn in some of the member states could be considered as a challenge to their internal coherence and their joint aspirations."

The new bank will also provide some economic security to lessen the impact of future global economic crises or recessions. While member countries were all affected by the 2008 global downturn, the BRICS' economies rebounded at a faster rate than some of their Western counterparts. This showed they had a strong case for a "seat at the table", which Carolijn says would translate to increased influence in global financial and economic decision-making processes.

Although NDB resourcing is not at International Monetary Fund (IMF) or World Bank levels, it will fund national and regional projects that larger global institutions may not back. The BRICS "story", which started with initial bilateral agreements, will unfold further in 2016 when the NBD announces which infrastructure projects it will fund, she says.

Carolijn has been conducting field research in Brazil, India and South Africa and working as a visiting scholar at prominent think tanks where she interviewed representatives from corporations and civil society about BRICS-related infrastructural development projects.

By focusing her research on projects that have been executed by Brazilian multinationals in Africa, and analysing existing infrastructure development, Carolijn will develop a basis for comparison with future projects arising from BRICS member collaboration.

"By looking at roads, railways and ports, we can examine the storylines for infrastructural development, and the way these are communicated – this is done through the official BRICS websites and joint agreement documents, which specify their commitments as well as through project development by the private sector. I will also look at the ground level – how these commitments are perceived by civil society and business. This will illustrate how strategic and effective these stories of infrastructural development are."

Although outside the scope of her thesis, Carolijn says an example of a project that may have significant economic benefits for BRICS members is the "One Belt, One Road" project, which may include the "Silk Road Economic Belt" and "21st Century Maritime Silk Road".

If completed, the "Belt" network would consist of overland road and rail routes, oil and natural gas pipelines and other infrastructure projects stretching from Central China, through Central Asia, and to Russia and port destinations in Northern and Southern Europe. The maritime "Silk Road" will be a network of port and coastal infrastructure projects linking Asia and Africa with the North Mediterranean.

The global balance of power – the world order – may change as emerging economies grow, but whether the BRICS will have a "dominant role in the creation of a world where emerging countries are more represented is as yet unknown."

"However, the story of economic partnerships promoted and funded by the BRICS group will be significant if words are turned into deeds and development is truly sustainable," Carolijn says.