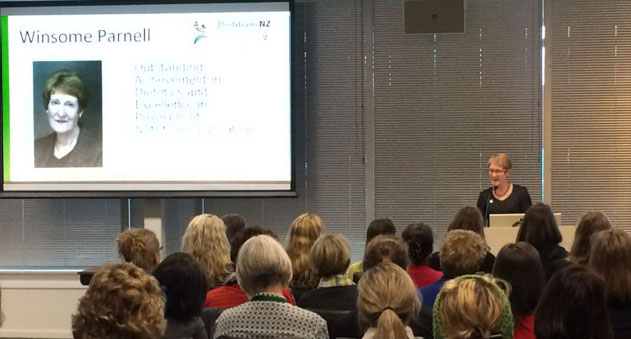 It is with great pleasure and admiration that Associate Professor Dr Winsome Parnell is nominated for the Dietitians NZ Award of Excellence for Outstanding Achievement in dietetics by her peers – Dr Penny Field, Christine Thomson, Donnell Alexander, Jenny Reid, Elizabeth Aiken and Julie North.
Winsome has held a long and overwhelmingly significant career in nutrition and dietetics in New Zealand pioneering much of the dietetic training we have today. She has educated, influenced, and mentored so many colleagues with an unwavering commitment to sound science and common sense.
Her achievements are numerous, as have been her involvement in committees, forums, boards and advisory groups. She has always given tirelessly of her wisdom and expertise.

Early in Winsome’s career in 1969 she accepted an appointment as a Junior Lecturer in the School of Home Science and in 1971 Winsome completed her hospital-based dietetic training in Wellington, however unlike many of her colleagues she chose to work in research rather than clinical practice – the ensuing six years with Professor Ian Prior in the Wellington Epidemiology Unit.

In 1979 Winsome travelled to Ontario, Canada, where she completed an MSc. Upon her return to New Zealand academia in 1980 Winsome was appointed Lecturer in the Department of Food Technology, Massey University and was promoted to Senior Lecturer until 1989 when she moved to the Department of Human Nutrition at Otago University.

During her time at Otago as a Senior Lecturer and now Associate Professor Winsome has, since 2007, led numerous strategic initiatives in teaching and research. Her unwavering focus on food, nutritional adequacy, rigorous science and social justice has driven her commitment to offer postgraduate education to students at a distance, undertake research with Pacifica people, the food insecure and led National Nutrition Surveys. She gained her PhD in 2005 in the area of food security.

Winsome’s teaching interests have been many and varied – she was involved in curriculum development, student assessment, teaching procedures and materials of the PGDip of Community Nutrition and was involved in the recent change from the PGDip Diet to the MDiet programme.
Winsome’s major contribution to research in the Otago University Department of Human Nutrition has been the development of survey methodology for assessing nutritional status of adults. Winsome has lived and breathed surveys for almost two decades and of critical significance is the work she has tirelessly driven in food security and gathering data on the New Zealand experience in this area – she has contributed significantly to the global knowledge base of this area and to the recognition of food insecurity in developed countries. Other research interest have included nutrition and poverty, infant and children’s diets, iron status, iodine fortification, folic acid fortification and dietary modelling.

During 1988 to 1991 Winsome was an active member of the Nutrition Taskforce established by the then Department of Health. The taskforce produced an influential report that guided the Department and health sector on food and nutrition issues for the following decade or more.
In the early 1990’s Winsome, along with Jim Mann and Mary Johnston led Otago’s bid to the Dietitians Board to provide University based postgraduate education for New Zealand Dietitians. Since the commencement of PG Dip Dietetic Programme in 1993, and the Master of Dietetics programme in 2011 Winsome’s teaching and research supervision has influenced the education and thinking of generations of New Zealand Dietitians.
Her teaching at undergraduate and postgraduate level includes maternal and infant nutrition, dietary assessment, nutrition policy, the interpretation of National Nutrition Survey data and Pacifica nutrition. In addition Winsome has supervised over 10 Dietetic Practicum research projects, the MSc thesis research of seven dietitians and to date seven MDiet thesis projects.

In 2002 the Minister of Health appointed Winsome as member of the Dietitians Board, a position she held until 2007. Winsome contributed actively to the Board activities including convening the Board’s Education and Accreditation Committee 2003-2007.
In more recent years Winsome has been a critical member of the New Zealand Health Star Rating Advisory Group, facilitated by MPI. Winsome’s technical savvy and personal encyclopaedic knowledge of what New Zealanders eat has been fundamental for this Group.
Winsome has also provided independent and objective advice to the Sugar Research Advisory Service for 13 years, for which both Network Communication, as secretariat to that group, and New Zealand Sugar is forever indebted.

Winsome is known and can be relied upon to cut through the jargon, the debates and the discussions, to give a simple summary of how it really is, in New Zealand households. One of Winsome’s nominators recalls with a smile at her outbursts at meetings as she now prepares food for her own young family “Anyone who thinks custard can be made without a little sugar has clearly never made one!” and “how can a casserole sit on your plate if you haven’t thickened it with a little cornflour?!”