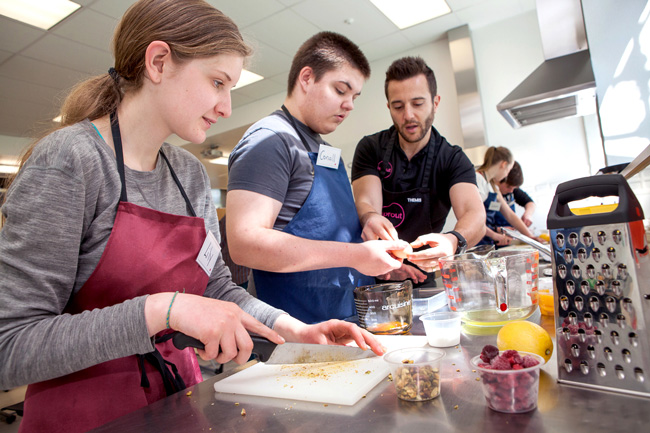 Lilly Eyles (14) and Conall Donaldson (15), supervised by Dietician Themis Chryssidis, hone their skills at cooking during the pilot COOK programme run by the Department of Human Nutrition this week. Photo: Sharron Bennett.

The teenagers from schools around Dunedin were part of the COOK (Create our own Kai) project for Year 9, 10 and 11 children being run by researchers from the University’s Department of Human Nutrition, using the food technology suite at the College of Education.

This week’s intake of young Year 9, 10 and 11 “cooks” was part of a week-long pilot project, culminating in them cooking lunch for their parents at the College tomorrow, Friday 16 December.

Following the success of the pilot, the project team is looking for a further 100 Year 9 and 10 volunteers to take part in the three further week-long free programmes from 9, 16 and 23 January, as well as a further 100 teens for the control group. There is a small financial reimbursement of $20 per filled-out questionnaire for the control participants.

Lead researcher Dr Paula Skidmore, of Human Nutrition, says the hypothesis behind the study is that young people who learn how to cook are healthier.

"By the end of this, the aim is that the participants will have learned how to budget and buy something, roast something, bake something and chop with a knife. It’s a life-skill, akin to getting your driver’s licence."

“For this study, we are interested in ascertaining whether the intervention gives them the skills and confidence to cook more, and if it makes them enjoy cooking. Healthwise, we want to see if it improves their diet and their wellbeing,” she says.

She says the pilot project has so far proved a total hit with the kids.

“It’s great to see how engaged and proud they are. They’ve really developed their skills over the week and are working really well together. The programme is designed to be fun, so we’re really glad they’re enjoying it,” she says.

The project collaborators are Masterchef Australia All Stars top cook Callum Hann, and dietitian Themis Chryssidis, who run the Sprout Cooking and Health Studio in Adelaide. They are training the local research team Caleb Robinson, a dietetics graduate, and Rosie Finigan, a chef from Carrington College, to manage the cooking sessions with new volunteers, beginning on 9 January.

Callum and Themis have developed the original programme in Australia and have run it in Australian schools to empower young people to cook.

The recipes they use are adapted to suit Dunedin’s produce, and are specifically designed to be affordable and uncomplicated.

“Over this week, we have developed 18 recipes with them. By the end of this, the aim is that the participants will have learned how to budget and buy something, roast something, bake something and chop with a knife. It’s a life-skill, akin to getting your driver’s licence,” he says.

Both Callum and Themis felt Caleb and Rosie were doing “great” and had already come to grips with the project requirements. They also praised the College of Education facility, which was “excellent”.

During the programme in the New Year, the teenagers will receive five days of cooking classes - Monday to Friday, 9am to 3.30pm.

After that they get a bag of food each week for five weeks, with recipes, so they can cook for their families.

“We will also have a Facebook site set up where they can post pictures of the food they cook or recipes, and just generally interact about food and cooking, and we have weekly spot prizes for this,” Dr Skidmore says.

Know someone who could take part?