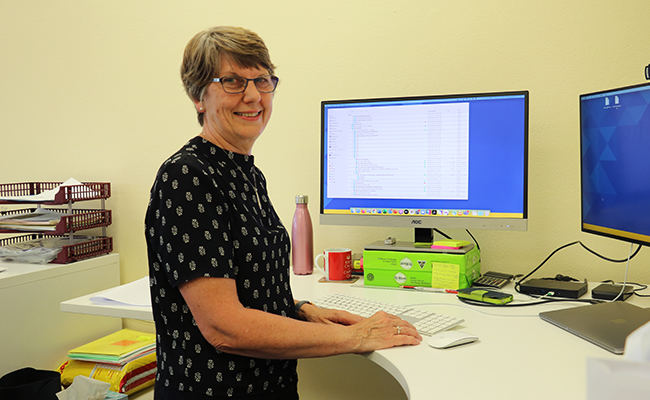 Lyn Tyrell is celebrating 45 years at the University of Otago.

A lot can change in 45 years, especially at the University of Otago.

When Client Services Administrator Lyn Tyrrell, based in Human Nutrition, joined the University at 18 years old on 20 January, 1976 as the Head of Department’s secretary.

In those days the job was labour-intensive, with the technology of the day making tasks take much longer than they would today, she says.

“We didn’t have computers in those days, so it was a very old typewriter. They were just starting to bring in electric typewriters. In those days there was were no photocopiers or fax machines, everything instead any copying had to be done on a gestetner.”

A gestetner was a duplicating machine in which a stencil was placed onto revolving drums where ink was placed and fed through a screen evenly through the stencil and onto paper.

Whenever a research grant application was requested to be produced for an academic staff member Lyn would make up a master copy of the application, from which the multiple copies that were required would then need to be created by hand on the gestetner. It was a time-intensive process but as time moved on, so did the technology.

“It’s been really rewarding to see them progress through the years that they’ve been here and see all the wonderful things they go on and do.”

“As the Department grew and University processes changed and updated. The University installed their first large photocopier which was located in the basement of the Registry. We’d go over there and line up waiting to do our bulk copying.”

Eventually photocopiers started to be placed in Departments, fax machines came and went and computers sped the entire process up for administrators like Lyn, and everyone else on campus.

“Step by step the processes over the years have made it much more task-friendly. Certainly from when I started you wouldn’t recognise the place.”

After returning from parental leave in 1994 Lyn joined the newly established Dietetics programme in the department as an administrator and spent until 2018 in her role there. Following on from the Support Services Review Lyn became a Client Services Administrator in the Human Nutrition Department.

While there has been a lot of changes in 45 years, the job continues to be enjoyable, Lyn says.

What makes it most rewarding is the people she has met along the way – her colleagues and especially the students who have passed through the department.

“It’s been really rewarding to see them progress through the years that they’ve been here and see all the wonderful things they go on and do.”