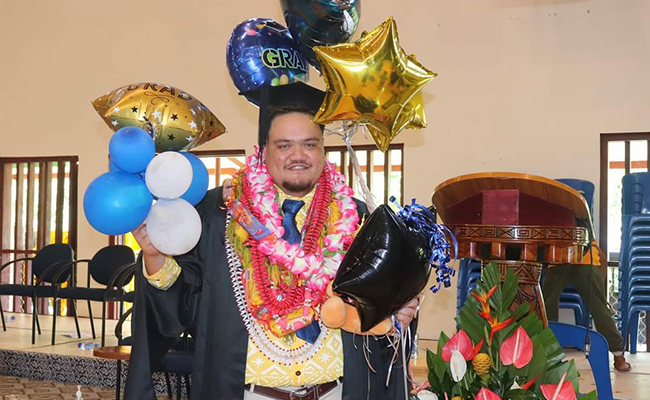 Darryl Pupi was able to attend a graduation ceremony at the National University of Samoa.

When Darryl Pupi first arrived at Otago from Samoa as an undergraduate he knew he wanted to work in the health field, he just didn’t know in what capacity.

Darryl graduated in absentia with his Master of Applied Science in Advanced Nutrition Practice on 18 December.

“When I was studying for my Bachelor’s, I was just trying to look for a future for myself but when I came back for master’s I was more focusing on a future for Samoa. My whole degree I was fighting for what’s best for Samoa. Hence choosing to have work placement in one of New Zealand's biggest health providers in Wellington away from Dunedin.”

Born and raised in Samoa, Darryl completed his full primary, secondary education and foundation studies in the islands, before receiving the Manaaki New Zealand Aid Scholarship from the Ministry of Foreign Affairs and Trade to come to Otago, where he completed his Bachelor of Science in Human Nutrition in 2015.

While he knew he wanted to do something health-related, Darryl made it to the end of his first year still unsure what field he wanted to go into.

“It wasn’t until I went to the International Office after finishing Health Sciences First Year that they gave me the list of top health priorities for the Ministry of Health here in Samoa – human nutrition was at the top of that list.”

Following his completion, he returned to Samoa but he still wasn’t entirely sure about his choice in career.

It wasn’t until he began working for the Ministry of Health Public Health, he really saw the worth of it, he says. 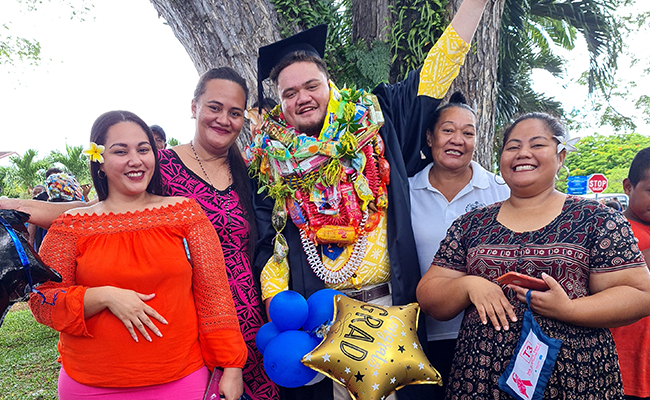 “I wasn’t really in love with the degree but then when I came back and worked in Samoa that’s when I saw there was actually a massive need in the islands. All non-communicable diseases and unhealthy lifestyles involve a massive component around nutrition.”

While working for the Ministry he went to five international meetings representing Samoan nutrition, including a World Health Organization summit for the Pacific Region Nutrition, and was even contracted by the United Nations to work in Tokelau on nutrition.

“I was selected by the United Nation because nutrition is an area that lacks qualified Pasifika people and that’s where my love for Human Nutrition grew.”

Darryl decided he wanted to come back to Otago and complete his master’s so he could continue to contribute in preventing diet and lifestyle related diseases in Samoa. Again, he was awarded a NZ Scholarship.

He returned to Otago with a different mindset.

“When I was studying for my Bachelor’s, I was just trying to look for a future for myself but when I came back for master’s I was more focusing on a future for Samoa. My whole degree I was fighting for what’s best for Samoa. Hence choosing to have work placement in one of New Zealand's biggest health providers in Wellington away from Dunedin.” 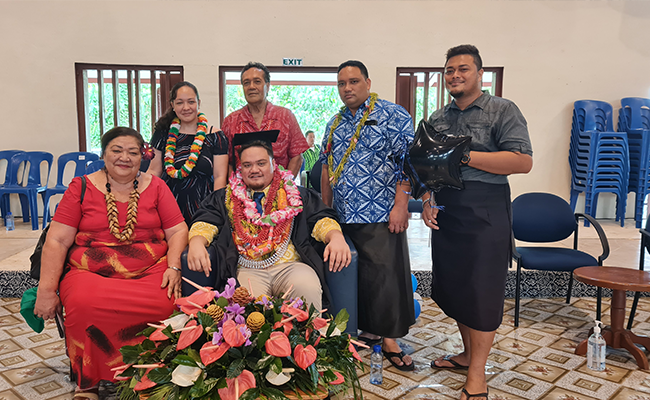 Darryl Pupi celebrating his graduation with his aiga (family).

Alongside his Advanced Nutrition studies, he also took Public Health as a minor, focusing on health promotion and policy writing.

“That’s where I found an area where I’m very interested in – preventing people from getting sick, instead of treating people when they are already sick.”

During his coursework master’s Darryl was involved in research into identifying ways for Pasifika people to access Pacific healthcare providers, where he tried to identify barriers for people accessing care.

He was also involved in research into the benefits of coconut oil. Something he says is very important for Pacific Islanders - “because we eat a lot of coconut!”.

“When I was studying it, I found there was a lot of saturated fats in it and that could lead to heart disease. So, it’s a good insight where I can provide advice to people.”

Darryl also had the opportunity to join the Pacific Health and Obesity Research team at the Research Centre for Hauora and Health.

There he was able to work alongside other Pacific health researchers including Dr Riz Tupai-Firestone, an experience he says was invaluable to his own development as a researcher.

Since arriving back in Samoa, Darryl has returned to the Ministry and has been involved in the creation of guidelines and policy by the Public Health team.

During my master’s – I first give all praises to the Lord, as I am simply nothing without him.

It wasn’t easy being away from home in Samoa. Also had to go through numerous COVID-19 outbreaks and lockdowns in New Zealand. Therefore, not only I felt the warmth of prayers from Samoa I also acknowledge the support of my village in New Zealand my little brother Clinton Pupi and my Otago family Aiga of friends, also the support of the Pasifika community at the University and the community in Dunedin, and lastly but not the least very thankful for my family in Wellington and Pupualii family in Auckland.