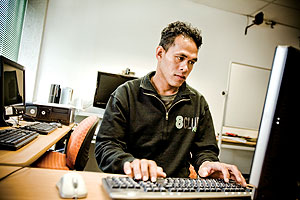 Hobert says he has "a strong sense of belonging here". The lecturers, he says, are "awesome" - and the University's Pacific Islands Centre is his "second home".

Hobert Sasa has travelled far for his education in the hope that, one day, others won't need to.

Instead, he has a vision of children on remote islands in Samoa and elsewhere in the Pacific having access to the same learning opportunities as those attending urban schools.

This topic is now the focus of his postgraduate studies in information science at Otago. "I came from a rural part of Samoa myself," he says. "The technology that is available now means that ideas like virtual classrooms and remote learning are actually possible."

New approaches to education mean poverty is less of a barrier. And it means that families don't have to make the hard decision whether to educate their children, but lose members of their communities to cities.

Hobert's studies have been enabled by a Memorandum of Understanding between the University of Otago and the National University of Samoa, where he works. He believes it's important Samoa develops its own indigenous professional population. "At the moment, most of our ICT experts are brought in from Australia and New Zealand."

Having completed his Diploma for Graduates at Otago, he was excited by the thought of returning for further study. And, despite, the differences between Otago and Samoa, Hobert says he has "a strong sense of belonging here". The lecturers, he says, are "awesome" - and the University's Pacific Islands Centre is his "second home".

But mostly, he says, he is grateful for the opportunity to pursue his education and career, knowing that what benefits him benefits Samoa.