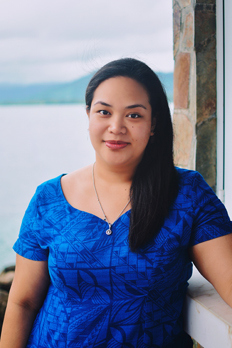 She’d heard Otago was a prestigious university, and chose Dunedin as it was completely different from Samoa — and she really wanted to see snow.

Her study choice was easy. “I had always been interested in finance and I wanted to do a double major. Doing a BCom at Otago was so good because you do 100-level papers from all the different majors so you can see what you actually like, and that’s how I found Information Science to go with Finance.

“I’d always been interested in the areas of corporate finance, investment and analytics and I liked dealing with systems, which made mixing Finance and Information Science such a good combination. There will always be a need for finance and the digital age is revolutionising how we deal with it.”

The Pacific Islands Centre helped Aysha find her feet. “I’d never been to the South Island before and it was completely out of my comfort zone. I didn’t know anyone in Dunedin but I was made to feel right at home and met other students there. The centre helped with tutorials and later I gave back by being a tutor for some of the papers not only with the centre, but also as the course tutor for one of the 200-level Information Science papers.

“Dunedin is such a student-oriented city. I really enjoyed my time there — and even got to experience more snow on a ski trip to Queenstown only a few hours away.”

After completing her BCom and an honours degree in Information Science, Aysha returned to Samoa and entered banking, working as a Financial Markets Dealer with Westpac, which later became Bank of South Pacific. She is now Chief Investment Analyst at the Unit Trust of Samoa.

“From my first graduate position onwards, I applied what I learned at Otago in systems available to streamline and automate, to simplify information gathering and analysis with the available resources. I still use what I learned in Information Science daily. It is a subject that can be adapted and applied to just about anything; it opens up a whole world of opportunities.”