Please do not contact this university directly.
For all enquiries please contact the Exchange Office at exchange@otago.ac.nz.
Last updated April, 2020

There are five faculties including business, law, languages, literature and civilisations, and philosophy. A wide range of courses (predominantly Business and Arts) are taught in English, under the S.E.L.F. (Study in English in Lyon, France) Programme.

The School of Management has been developing fully English-taught programs to meet the demand of exchange and individual international students:

Information on student visas and insurance for students going on exchange can be found elsewhere on this website. 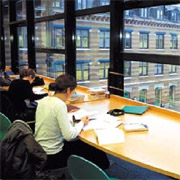 The Université Jean Moulin-Lyon 3 is part of the University of Lyon, which is a network of six institutions-Universities and 'Grand Ecoles'. The original Jean Moulin campus was established in the nineteenth century and today the historic site is still used but another campus called 'Manufacture des Tabacs' situated in a former Tobacco Manufactury has been developed.

The city of Lyon and region

Lyon is in the heart of Europe, just two hours from Paris, Geneva, Milan and Barcelona. It is France's second largest city, with a population of about 1.5 million. Lyon is located in the heart of the Rhône-Alpes Region which contains many well-known tourist treasures. For those who want to explore the area the Alps are only an hour or two away, and the Riviera just a little further.

Lyon is filled with beautiful and historic amphitheatres, basilicas, churches and many other treasures. The very special Lyon way of life is inseparable from its rich and intense cultural activity: the Opera, two national orchestras, the Dance Centre, the Cèlestins theatre, and twenty-seven museums including the famous house of the Lumière brothers.

Five years ago the city embarked in an ambitious "illumination plan" and now over 100 monuments, bridges and sites of interest are lit up from dusk till 1 o'clock in the morning, creating a fantastic spectacle.