Please do not contact this university directly.
For all enquiries please contact the Exchange Office at exchange@otago.ac.nz.
Last updated May, 2020

Thirty percent of the courses at Bocconi are offered in English.

There are two Italian language courses offered to exchange students. The first is an intensive Italian Language Crash Course (beginning of each semester) and costs approximately 100 EURO. The second is an Italian Language Course (throughout each semester). During the first language course various "Cultural Orientation Sessions" have been planned with the goal of helping you understand Italy, Italian culture and to help you adapt better to Italy.

The University offers accommodation placement in a number of different halls. Information about halls and other forms of accommodation is sent out with your acceptance pack from Bocconi.

The University, city and region 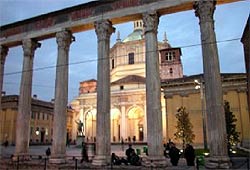 Universita Commerciale Luigi Bocconi, founded in 1902, has played a leading role in Italy's social and economic modernisation, by remaining true to its founding values of being a major research university, democratic and open to the world, as well as financially and politically independent. At the outset of the 21st century, Bocconi contributes to the advancement of European higher education, by teaching business and economic knowledge to prospective managers and researchers from all over the world. It is a member of the prestigious Community of European Management Schools (CEMS), where only one University per country may join.

The city of Milan and region

Milan is said to have been founded by Celtic tribes, who settled along the Po River in the 7th century BC. In 222 BC, Roman legions marched into the territory, defeated the locals and occupied the town, which they called Mediolanum (middle of the plain). The city's key position on the trade routes linking Rome with north-western Europe ensured its continued prosperity. The city endured centuries of chaos caused by waves of barbarian invasions. It formed a commune (town council) in the 11th century, and it led the city into a period of rapid growth. Austria gained control of the city from 1814-1859, and it wasn't long before troops under Victor Emmanuel II and Napoleon III wiped up the Austrian forces at the Battle of Magenta. Milan was incorporated into the Kingdom of Italy in 1860. Heavily bombed in WWII, the city was subsequently rebuilt and quickly grew to its modern industrial prominence.

The city of Milan