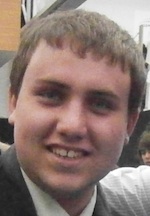 Language Perfect offered one lucky student a scholarship (Bridget Gilchrist Language Perfect Scholarship) of NZD$5000.00 towards their course fees when they enrolled in either a Bachelor of Arts (Languages) or Diploma in Languages at the University of Otago for the 2014 academic year. This is what the winner, Daniel Abbott had to say about winning and studying his chosen language:

Winning the Bridget Gilchrist Language Perfect scholarship is a huge stepping stone for me with my studies in Japanese. I cannot describe how proud I am to win both this scholarship and the Japanese language prize 2013 at Nelson College at the same time. These are both possibly my greatest achievements in life and for them to be for Japanese makes them even more special.

I started studying Japanese at Golden Bay High School in 2007. I very quickly fell in love with learning the language and knew that I wanted to pursue it later in life. I then went to Nelson College in 2009 and continued to study Japanese right up until 2013.

I think learning languages is something everyone should do as it opens so many doors for career choices, social opportunities and so much more. By not restricting myself to one language, I am able to seek jobs, social activities and a place to live in not only English speaking countries, but Japan also.