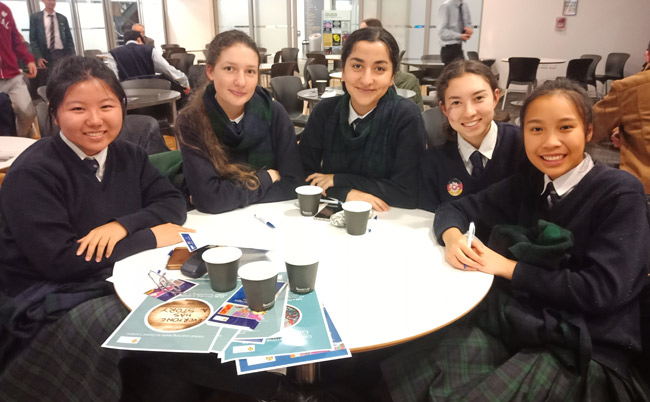 Dunedin secondary school pupils last week received a taste of the languages on offer to study at the University of Otago.

The Languages and Cultures Programme in the School of Arts held its annual culture quiz night last Tuesday evening to encourage secondary school pupils to study languages at the University.

The Head of the Programme, Dr Antonie Alm, says the quiz is a good way to “build bridges” between the University and secondary school pupils thinking about attending Otago.

The informal evening also provided an opportunity to ease the transition from high school to University and allow pupils meet staff and students from the Languages and Cultures Programme, she says.

“Having the languages students gives a wider perspective for the [prospective] students.”

The University of Otago provides papers in Chinese, Japanese, French, German and Spanish, as well as Asian Studies, European Studies and Global Studies.

Dr Alm encourages students to consider taking even one language paper while at University because it can expand global perspectives.

Studying languages not only helps people through work and travel, it also improves cultural and interpersonal skills, she says.

The quiz was divided into sections relating to each language taught at the University, mostly related to popular culture and history.

The five-member team from Columba College spoke an impressive 10 languages between them including; Mandarin, Korean, Persian, German and French.

For Columba team member Sara Hashemi, who speaks five languages, learning language is about the fun of it.

Her team mate, Victoria Williamson, says learning a language can open up the door to opportunities you may not have otherwise received. Through studying German she was able to get a scholarship to study abroad in Germany.

While the team weren’t sure they were going to continue to study languages at Otago, they say they will continue to utilise the opportunities being multilingual brings.