The Law of Secured Credit Launches 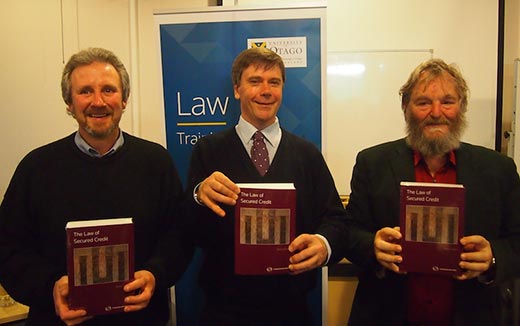 The Law of Secured Credit, by University of Otago academic Barry Allan was launched recently at a function hosted by the University and attended by friends, members of the profession, colleagues and students.

The book is one of the largest bodies of academic writing completed for a first edition by a single author in New Zealand.

It goes beyond personal property securities and encompasses law on either side of the Tasman – Australia and New Zealand.

According to Thomson Reuters NZ Commercial Manager- Product Development Ian McIntosh who spoke at the event, and commissioned the work, the book is a monumental piece of scholarship. It is, he says, one of the largest bodies of academic writing completed for a first edition by a single author in New Zealand. It is gargantuan in size – 1800 pages and was completed over five years. The effort involved prompted Ian to compare Barry’s accomplishment with that of Sir Edmond Hillary’s, our heroic mountaineering icon. Ian says when he commissioned the work it was supposed that it would be complete in 18 months. It was, he thought, in the scale of things; a smallish hill to climb. However the scope of the project grew to “Everest” size. The completed text, he says, goes beyond personal property securities and encompasses law on either side of the Tasman – Australia and New Zealand.

In his speech author Barry Allan discussed the book’s history, its importance to the legal world and gave thanks for the support and encouragement he received on the long journey to bring it to fruition.

The history leading to the current text

Barry says the work actually started in 1994 when, newly appointed to Massey University as an assistant lecturer, he had to come up with a research topic. The Personal Property Securities Act was then on the horizon and looked as if it could be fruitful to explore. It was, and that became the subject of his first book.

That research grabbed his interest and inevitably led to more.

This current book came about as the result of approaching Thomson Reuters Australia with a proposition to write on their Personal Property Securities Act. They, however, preferred taking on writers resident in Australia and referred him to Ian McIntosh who was at that time seeking writers for Gault on Commercial Law in secured transactions and consumer credit. Over time, and in discussion with Ian, the idea formed that the two subjects (credit and security) could be fused, while simultaneously extending their reach to cover both Australia and New Zealand.

The importance of the book

“My book is a pretty big deal, being on a topic more important than the wheel.”

On the importance of credit

In his speech Barry quoted the American President of the National Consumer Finance Association who in 1951 described consumer credit in particular as the “miracle of the Twentieth Century” and of greater importance than the invention of the wheel because it allowed Americans to live longer, possess more, produce more and enjoy more variety than ever before.

Despite the self-deprecating irony in his remark that his book “is a pretty big deal, being on a topic more important than the wheel”, nowadays living without that “miracle of the 20th century” is almost inconceivable. As Barry said, when big business got behind consumer credit, first with hire purchase and shop accounts and then credit cards, it gave the use of consumer credit a kind of moral legitimacy. It made “living beyond one’s means” alright, and expected to the extent that taking on consumer credit has become a rite of passage – an indicator of adulthood.

He covers the full implications of credit, either consumer or business, in his book including its flipside. What happens when living is no longer easy?

He says he’s particularly interested in the plight of consumer borrowers and through this book wants to help ensure that lenders know and respect the rights given to borrowers.

Just as credit has transformed our lives on a personal level it is, as the Honourable Justice Mark O’Regan says in his foreword, “the lifeblood of the economy”.

As Barry says, credit “facilitates the smooth running and expansion of business” and can give “a company leverage to increase its profits by undertaking more business than would be possible if it were restricted to using its own funds.”

On the significance of security

Security is the other face of credit. Neither safe lending nor borrowing is possible without it and the more assurance that can be given to a lender, the more confidence there will be about lending. The two go hand in hand, both influencing and informing the other. Secured credit allows for greater business which in turn fuels greater consumption, which in turn … It is cyclical.

As a result, says Barry, much of the book covers the way varying forms of property are dealt with by the law, and then the specific rules created to facilitate their use as collateral.

By logical extension the book also deals with guarantees, which can give a type of assurance of payment, and insolvency – because a security interest needs to survive the bankruptcy or liquidation of the debtor.

Barry says his book is unique. He says he is aware of individual works in both Australia and New Zealand on specific aspects of his topic. However, he says, there is nothing that covers the range and depth of information he does across both countries.

He says there was a wonderful Australian book by the late Edward Sykes: The Law of Securities: an Account of the Law Pertaining to Securities over Real and Personal Property under the Laws of the Australian States which was part of the inspiration behind The Law of Secure Credit. Although he admired it hugely, the last edition was published in 1993 and it never embraced New Zealand law. In contrast his book is up to date as well as pertinent to Australia and New Zealand.

Barry acknowledged that he needed to thank Ian McIntosh for allowing him to do what he needed to in terms of broadening the scope and then taking the time to fulfill the increased expectations.

Those thanks were due despite, he said, how Ian “scared the hell out of me at one point, by sending an email demanding that I give him the book that day – when I was way less than finished!”

Barry also thanked his “wonderful editors” at Thomson Reuters: Kevin Leary and Jason Bull whom he said made lots of really valuable suggestions to improve the clarity of what he had written thus turning the book into a much better thing than it would have been.

He lastly thanked his friends, colleagues, the Faculty and the University, for not forsaking him when the going got tough and for keeping him motivated. He was particularly grateful for the sabbatical year that allowed him to finish the writing while traveling the world. That meant he could work, he said, where ever he chose. That included while rolling through the Canadian Rockies on a train in a marvelous purpose built glass observation carriage and in many different libraries all over the world. 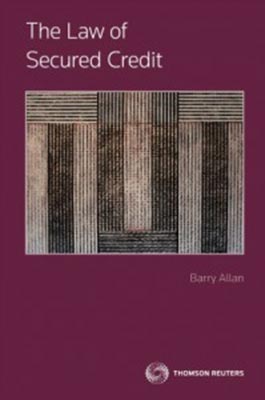 The Law of Secured Credit is available in book, ebook and online formats.