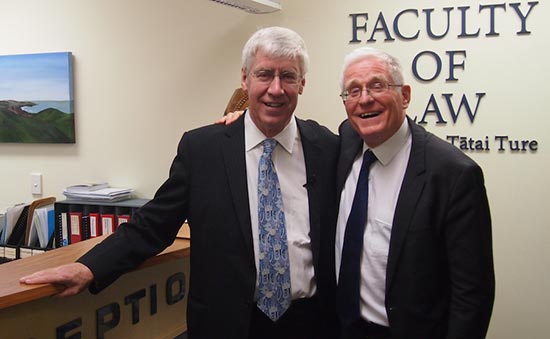 The Faculty was delighted to host a recent visit by one of our own Otago graduates, Professor Jeremy Waldron. Jeremy is currently Professor of Law at New York University School of Law, where he teaches legal and political philosophy.

Professor Mark Henaghan, Dean of Law stated “Jeremy is the without a doubt the world’s greatest legal philosopher. We are so lucky to have him visit us and share his expertise with our students, staff, members of the local profession and the wider public.”

Until recently, Jeremy was also Chichele Professor of Social and Political Theory at Oxford University (All Souls College). A prolific scholar, Jeremy has written extensively on jurisprudence and political theory, including numerous books and articles on theories of rights, constitutionalism, the rule of law, democracy, property, torture, security, homelessness, and the philosophy of international law.

Elected to the American Academy of Arts and Sciences in 1998 and a fellow of the British Academy since 2011, Jeremy has given many prestigious academic lectures, such as the Tanner Lectures at Berkeley in 2009, the Holmes Lectures at Harvard Law School in 2009, the Hamlyn Law Lectures in England in 2011, and the Gifford Lectures in Edinburgh in 2015.

During his visit, Jeremy delivered guest lectures in Jurisprudence, as well as a staff seminar on What the Supreme Court should have said in Obergefell v. Hodges.

One of the highlights of his visit however, was the superb public lecture he presented, on the topic: Death Lists and Death Squads: Targeted Killing and the Character of the State. The lecture is available to view online here.