Fashionable solution to a world challenge 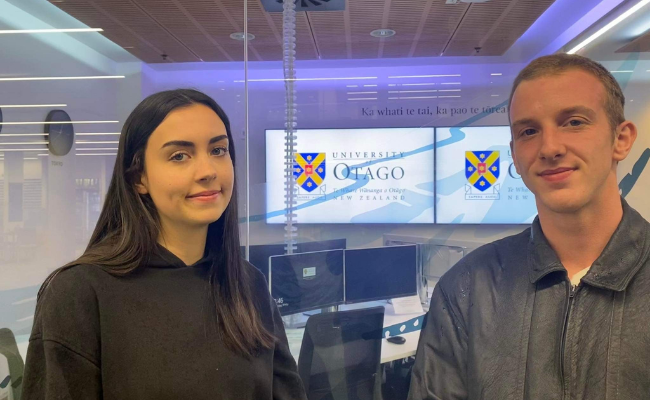 Georgia Cleaver and Jacob Myron are taking on The World's Challenge Challenge with their fast fashion business solution.

The World’s Challenge Challenge sees tertiary students from across the world competing for a top prize of $30,000. It’s an opportunity to engage in debate and discussion on issues which affect the globe, from poverty to climate change. Teams choose which of the world’s challenges they would like to strategise a solution to.

The team representing Otago this year is made up of Law and Finance student Georgia Cleaver and Computer Science student Jacob Myron. The pair have decided to take on fast fashion as their topic and have been mentored by Jude Chelliah. Their project previously won the Innovation Award at the Queens Entrepreneurship award based in Toronto in January 2022.

“I had a start up idea which I developed more through start up Dunedin,” Georgia says. “Jude had told me about the Queen’s Entrepreneurs’ Competition and I wanted to explore it further through that.

“We chose fast fashion because of the serious environmental and social affects it has on the world. I don’t know it’s discussed as openly as it should be. We wanted to explore it deeper and see what options are available to help people avoid fast fashion. While there are some alternatives, they aren’t always convenient or affordable. We wanted to create an affordable, convenient way for people to get clothing sustainably and so we’re developing a business model.”

Jacob says the teams plan is to help bring thrift shopping online to gain the accessibility so many fast-fashion businesses have.

“What we want to do is get a bunch of charity stores on board and give them a platform where they can sell their stuff online. Part of the problem is they often have too much inventory. Being online means they can put their stock out the back on a website so it’s still being moved.

“This is a business plan we want to launch ourselves. We’ve just finished our branding and named the company The Loop. We quite often go into thrift stores and pick up pieces we would know sell better online and show thrift stores how their higher end items will do better this way.”

The pair are finishing their submission which goes to judges later in May. Due to travel restrictions, the event will be held virtually in June and finalists will have a chance to present at different stages to a panel of international judges. The World’s Challenge Challenge is an annual event open to current tertiary students from a select number of global universities.