Summertime, when Bryan Adams got his first real six string, and when many law students get their first taste of law in the real world.

For three Otago law students in the University of Otago Legal Issues Centre’s (UOLIC’s) Summer Scholar Programme, this summer has been all about discovering how civil justice works throughout Aotearoa.

“Our summer programme exposes students to how New Zealand’s legal system works in real life,” says UOLIC Director Bridgette Toy-Cronin. “They also get to develop their research skills while helping us with our ambitious research programme.” 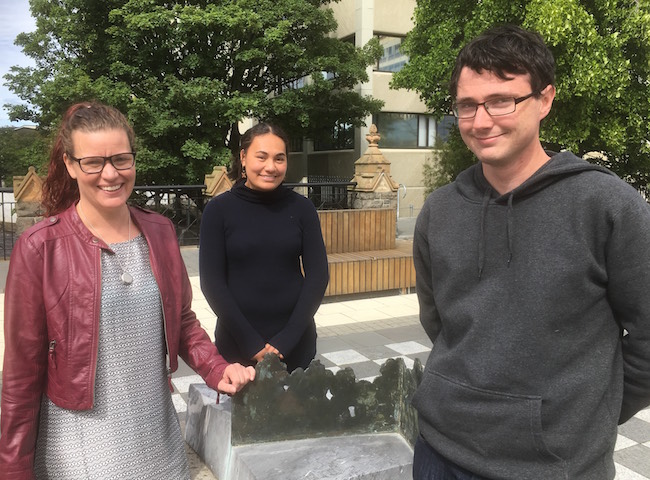 Final year law students Katherine Greenberg, Petrina Siania and Tim Wilkinson all agree they have discovered things not usually found in their law classes or even in the daily work of clerking for a law firm.

“I’ve gotten a real look at what you might call “New Zealand disputes” – like trucking, sheep, and property.” says Chicago-raised Katherine. Her work reviewing dozens of transcripts of disputes from the District Court contributes to the UOLIC’s research on the promise of online courts.

Some see online courts as ‘the promised virtual land’ where people can resolve their disputes cheaply with fewer lawyers and procedures. But, so far, this land is unknown and so are the prospects of successfully navigating it without a lawyer. To help chart the best course, the UOLIC is researching how effectively people might speak for themselves online, by comparing how lawyers and lay people articulate legal issues in court and through online platforms.

Katherine was drawn to the UOLIC by its access to justice mission, and while she has had to plow through a lot of data, she enjoys the insight it gives her into the lives of people who choose to argue their own case in court.

“There is an old saying, a litigant-in-person has a fool for a client, but reading the cases, you can see that this is a big and unfair assumption. It’s so important for everyone, lawyers and the public, to know there are a lot of reasons why someone might present their own case in court. It’s not just about saving money or being vexatious.”

Katherine is also working on the UOLIC’s research into the availability of free or low cost legal services in New Zealand. An UOLIC pilot report released in May 2018 found significant barriers to affordable legal representation in civil legal disputes, and now the UOLIC is diving into the reasons behind this. Katherine’s contribution has been to review decisions about complaints to the New Zealand Law Society about over-charging.

“Through this research you can see the stress, how litigation affects people’s lives, and how it can hit so unexpectedly.”

Petrina Siania agrees. She is also contributing to the low cost legal services project, and first learned about the UOLIC through its animated series about going to court. “I liked the animations because they covered the basics, which is really important; where I come from a lot of people don’t know about the law and don’t have the means to learn. Some don’t learn until it’s too late, and that’s really sad. No one should be in that position.”

Petrina hails from Porirua and works part time at Dunedin’s Barristers Chambers. She’s also the past secretary and incoming Vice-President of Otago’s Pacific Islands Law Students Association. For the UOLIC, she interviews lawyers about their perspectives on pro bono and low cost legal services.

“I’m learning about how different law firms operate, and their different perspectives about affordability and offering low cost legal services. I’ve learned a lot about what pro bono work is – everybody has heard of it but few know what it really entails.”

Petrina has enjoyed honing her interviewing techniques, as well as drawing on her qualitative research skills, gained while studying for a sociology degree along with her law studies. “It’s good skill building, and the UOLIC staff are very supportive, giving me great feedback on how to improve my interview skills”

Tim Wilkinson is harvesting judges’ views about litigants-in-person from two decades worth of judgments, which, he says, range from "mild sympathy to mild hatred." His work contributes to the UOLIC’s work on making civil litigation more accessible, affordable, and efficient for all New Zealanders. This includes asking how the justice system should accommodate those who argue their own case without a lawyer.

As well as reading cases involving one of contemporary New Zealand’s most notorious litigants-in-person, Colin Craig, Tim finds the diverse range of cases he reads intriguing.

“There are lots of dog cases. People often appear in person to defend their dog’s life, and the judges appear to be sympathetic to dogs' lives.”

Last Summer Tim worked for the Lower Hutt Police Prosecution team. While the criminal system’s well-known challenges made for an interesting experience, he has found the civil law to be even more confusing and expensive for people, and so finds research about how to overcome these issues very satisfying.

“It’s really cool seeing the range of civil justice issues and learning what really matters most to people who are actually experiencing the court system. The law we study is distant from reality, and more interesting to judges and lawyers. Here I see the law’s real-life impact on people, which students probably expect to see more of when they first get to law school.”

Tim had been interested in the UOLIC’s work on access to justice for a while and is pleased to be working here. “They research and publish cool stuff and look at law from a different perspective than anyone else in New Zealand.”