For Matariki and Māori New Year in previous years we have hosted events at Hocken in celebration of the season of wānaka (learning) and whanaukataka (community spirit) as part of the Puaka Matariki Ōtepoti Festival. This year due to the Covid-19 rāhui the festival was held online and on-air. Hocken staff contributed a waiata for the Puaka Matariki Seasonal Greetings video message board and spoke on the Puaka Matariki Iriraki Taiopeka radio show. Here we share a few taoka from the Hocken's published collections relating to Maramataka Māori and Matariki in celebration of Te Tau Hou Māori. 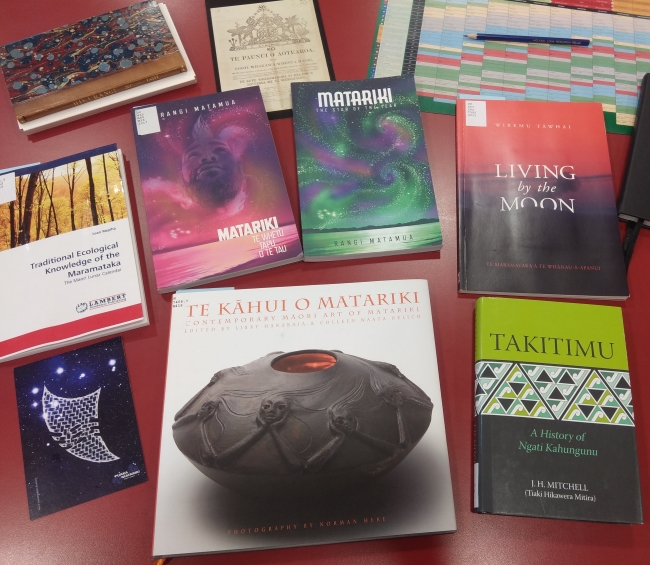 Maramataka Māori and Matariki in the Hocken's published collections

Tohunga kōkōrangi Professor Rangi Matamua (nō Tūhoe) was recently acknowledged as New Zealand’s top science communicator by The Royal Society Te Apārangi in recognition for his two decades of work focused on raising the profile of Māori astronomy, including teaching us about the Matariki star cluster. His pukapuka, Matariki the star of the year, and te reo edition, Matariki te whetū tapu o te tau, are a must for every Matariki reading list, generous, and highly readable. Importantly, his pukapuka correct misconceptions about Matariki and deliver an authoritative Māori perspective on the meaning of Matariki, and when and how Matariki should be celebrated. This year in Ōtepoti we celebrated the Puaka Matariki Festival from the 13th to 20th July following his mātauraka.

Matariki has historically been significant for the Kiingitanga. The Royal Crest of King Tāwhiao made in 1870 is named after Te Paki o Matariki, meaning widespread calm of Matariki. King Tāwhiao used this expression as a message of hope for peace in the Waikato in that time. We can see the crest in niupepa published by the Kiingitanga, called Te Paki o Matariki (1892-1935), and Te Panui o Aotearoa (Notices of Aotearoa) a gazette printed for the independent Māori Land Court established by the Kiingitanga in 1893. We have some of these in print at Hocken, Ko te Paunui o Aotearoa is reproduced here on a postcard; most can be found digitally on the niupepa Māori newspapers database and Papers Past.

Maramataka can be found in niupepa and in other places in the collections if you know where to look. You can search the catalogues for ‘maramataka’ but you’ll find more by also searching for ‘calendar’ and ‘almanac’. Living by the Moon by Wiremu Tawhai discusses the lunar month and the understanding of days and nights according Te Whanau-ā-Apanui mātauraka. Takitimu, A History of Ngāti Kahungunu by J. H. Mitchell includes a Kahungunu maramataka in the appendices. Traditional Ecological Knowledge of the Maramataka by Joan Ropiha (nō Rongomaiwahine, Ngāti Kahungunu) is a fabulous resource exploring various 19th century original Māori writings and maramataka charts to guide further study, application and innovation.

An 1891 Tainui maramataka, Ko te Hikurangi Tainui marama whiti, can be found in the Hocken’s Williams collection. Published in Thames, it includes notes compiled by Hoani Nahe (here spelled Nahi) (nō Ngāti Maru) (1833-1894). It is presumed to be an intended first in a series, but no further issues have been located. Maramataka pages alternate with blank pages for notes. Days are noted as “he tika” or “he hee” (hē) or variations of these. There are dialectal variations for the names of months. Important events are remembered on particular dates. Dr Hocken notes that it was given to him by Mr Davis of the Native Office and that it was “edited by a Maori who gives the old Maori names for the days and specifies their appropriation”.

For more on these taoka, come visit the Hocken, 10am-5pm Mondays to Saturdays, or contact Jacinta.