Hocken Collections Uare Taoka o Hākena holds one of the most important collections of McCahon’s art in New Zealand in addition to significant archives relating to his life and work.

Focusing on the period between the mid-1930s and mid-1970s, ‘A Constant Flow of Light’ draws from these collections presenting major works of art such as ‘The Virgin and Child compared’, 1948 and ‘The Wake’, 1958, examining key ideas the artist explored over this forty year period.

The Hocken began collecting New Zealand modernism in the 1950s because enlightened professionals such as former Hocken Librarians H.D. Skinner and Michael Hitchings and professional staff such as Hocken Art Curators Gordon Brown and Tim Garrity, worked alongside cultural patrons including Charles Brasch, Rodney Kennedy, Patricia France, John Caselberg and the McCahon family to ensure works by McCahon and other New Zealand modernists were represented in the Hocken’s art collection. Aware of the significant role Dunedin had played in shaping the beginnings of New Zealand modernism, they considered the Hocken, as a research collection accessible to all, the best place for important examples of this work to be housed. Their endeavours, combined with the University of Otago’s support, is the reason why the Hocken’s McCahon collection is so outstanding.

Originally timed to coincide with the ‘McCahon 100’ commemorations celebrating the artist’s birth in 1919, the end date for ‘A Constant Flow of Light’ has been extended in acknowledgement of McCahon’s significant relationship with Ōtepoti Dunedin and to share, investigate and interpret his life and art for new and current audiences.

In addition to Hocken collection items, the exhibition features a selection of notable McCahon works borrowed from the Dunedin Public Art Gallery, Te Manawa, Palmerston North and the Govett Brewster Gallery, New Plymouth. A 1947 drawing The Three Marys at the Tomb, given to the Hocken in 2020 by former University of Otago academic Dr Gary Blackman, is also included in the current exhibition. 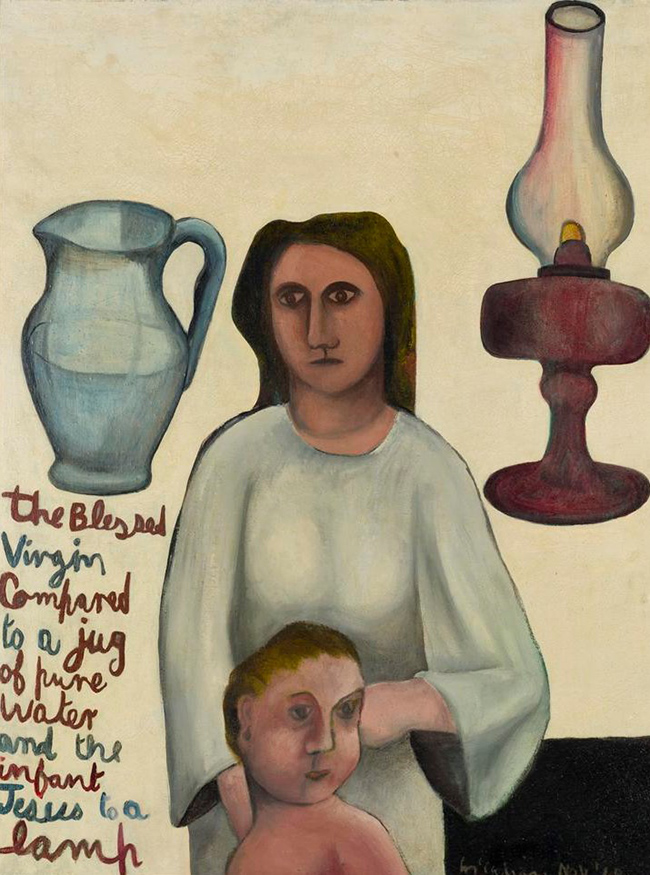 ColinMcCahon (1919-1987), The Virgin and Child compared, 1948, oil on canvas on board, 1053x805mm, given by Charles Brasch, Dunedin, 1963, HockenCollections, Uare Taoka o Hākena, University of Otago, 20,924.
Reproduced courtesy of the Colin McCahonResearch and Publication Trust.