Terrestrial Laser Scanning in a nutshell

Terrestrial Laser Scanning (TLS) is the main surveying technique used to complete the three dimensional (3D) modelling of the Arras Tunnels (Figure 1). The technology relies on a laser beam pointed at a surface; the delayed return of the beam reflected off the surface is used alongside the knowledge of the direction to position the point in 3D within millimetre accuracy.

Compared to traditional single point positioning tools, the TRIMBLE TX8 instrument is capable of collecting a million points per second. As well as being able to collect 3D coordinates of a point, the instrument can assign real colour to any point as well as a returned intensity value, allowing for high density colourised data and realistic texturing of the 3D model (Figure 3). 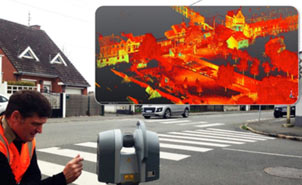 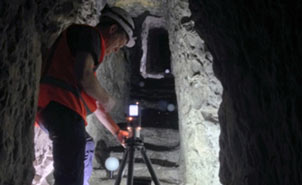 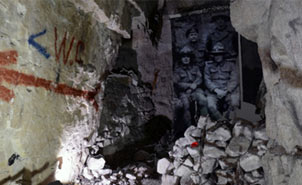 Figure 3. A screenshot of the TLS data showing high density and resolution of the data captured.

Individual scans need to be registered (“stitched”) together and are referenced with respect to a single scan. This can be done through the use of common tie points between adjacent scans in the form of spherical or checkerboard targets. An alternate way to complete the registration process is to allow sufficient overlap between adjacent scans and perform a surface to surface registration where the software uses an Iterative Closest Point (ICP) algorithm to complete the registration.

Once all the scans have been registered together they can be placed in terms of a Universal Coordinate System (UCS). To do this, a Ground Control Network (GCN) is established with points measured in terms of the UCS to position the model consistently with other geographical data. In our context, one challenge comes from the fact that the structure is underground and that the GCN needs to be established by surveying techniques from limited exterior access. An example of this can be seen in Figure 4 (bottom left) where a sphere has been coordinated using a total station and measured with a TLS instrument. A GCN can be established using GPS or total station. 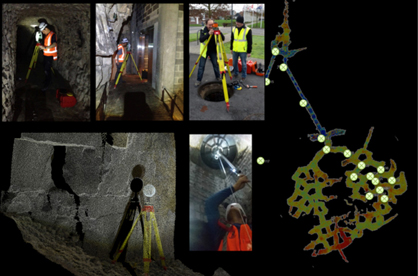