Our 2013 intake of Bachelor of Biomedical Science with Honours students have graduated at a ceremony held in Christchurch on 18 December 2013. 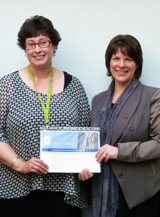 We would like to congratulate Helen Morrin for winning the Award for Exceptional Performance by a member of the General Staff.

During her time as the Cancer Society Tissue Bank Curator, Helen has demonstrated a high level of ethical, scientific, personnel, financial and managerial skills which have led to the provision of a world class cancer sample biorepository. She has demonstrated excellence in her field both in New Zealand and internationally and raised awareness of the processes and problems associated with banking human tissue at the University and governmental levels.

Welcome to Catherine Sheat who has just joined us as the new Cancer Society Tissue Bank Assistant.

We put together an enthusiastic team of students, scientists, a clinician and compliant family members to join the Cancer Society’s Relay for Life at Riccarton High School this year.

Of the 23 officially signed-up members, we always had to have at least one person on the track during the 18 hours of the relay, carrying a glorified piece of PVC pipe (our baton). The baton was beautifully decorated by the end with ribbons, feathers, stars and the like.

Most members brought their tents and stayed over; the evening and night had a festive atmosphere. In contrast, the start and candle light ceremony were much more sombre and emotional. The track looked great lined with many individually decorated candle bags. Seeing ‘I miss you mum’, or similar, really brought home the idea of why we were doing this.

Our team managed to raise in excess of $2800. The Cancer Society estimated that over $35,000 was raised at the Riccarton event, to be used to support cancer sufferers, carers and research.

Annika's project, Immune suppression and squamous cell carcinoma tumour biology is being supervised by Margaret Currie. Zac is working under the supervision of Logan Walker on evaluating molecular markers of breast tumour progression. And Teresa is doing a project looking into whether restore vitamin C synthesis to human cancer cells using gene transfer under the supervision of Gabi Dachs.