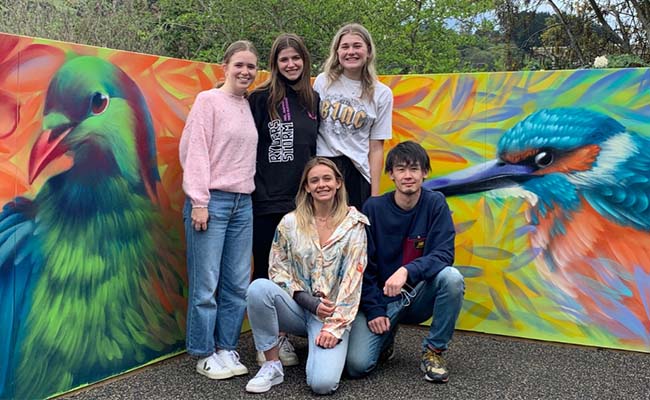 Otago students with artist Koryu Aoshima and the mural at Ross Home and Hospital.

A group of University of Otago Business School students are helping to brighten the lives of their elderly neighbours.

They undertook this social action project as part of the second year Developing Responsible Leadership (MANT 252) paper, which enables them to undertake service-learning to benefit their own leadership and a chosen community stakeholder. 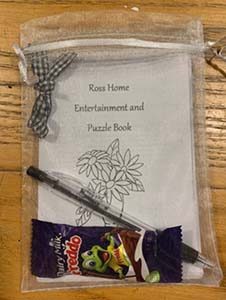 Tiffany says they had the idea for the mural after learning how COVID-19 restrictions have been particularly challenging for those in the elderly community.

“Rest home residents needed to stay in their residential bubbles during lockdown, meaning they couldn’t host any visitors, friends or family,” Tiffany says.

“This limits their social interaction and so we wanted to do something to help brighten their lives and ease some of that isolation.”

Koryu, who has painted several murals across New Zealand, regarded the work as a privilege and offered a lower fee in honour of the cause.

He painted the mural on the courtyard outside the dementia unit, saying that it felt great to see the “pure reaction on people’s faces” as he worked.

The team also supplied residents with “care packages”, which included an entertainment book with a letter from the team, a list of different activities, puzzles, poems, crosswords, sudokus, as well as a pen and chocolate.

Tiffany says the residents’ responses were “priceless” when the team handed out the packages and that they felt proud to be extending some aroha to their local community.

You can read more about the students campaign in the Otago Daily Times and see more of Koryu’s artwork on his Facebook page.