The University of Otago’s main campus is in Dunedin, which is located in the more southern part of Te Waipounamu. Ngāi Tahu has rangatiratanga (tribal authority) in this area, as well as over 80 per cent of the South Island. The University of Otago Charter states the institution's commitment to the articles of the Treaty of Waitangi, hence our primary Treaty relationship with Te Rūnanga o Ngāi Tahu. 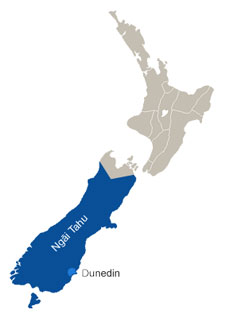 Ngāi Tahu is the iwi comprised of Ngāi Tahu whānui; that is, the collective of individuals who descend from the five primary hapū of Ngāi Tahu, Ngāti Māmoe and Waitaha, namely:

Throughout the South Island there are 18 local Papatipu Rūnanga (sub-tribal councils). An elected representative from each rūnanga makes up Te Rūnanga o Ngāi Tahu, the governing body overseeing the tribe's activities.

The three principal Papatipu Rūnanga in the Dunedin area are: