This page contains information on:

The Treaty of Waitangi was signed in 1840 between many Māori chiefs and the Queen’s agents. While it was signed in Waitangi on 6 February – where over 500 Māori and in excess of 200 non-Māori were gathered – it was also signed at various other locations (38) around New Zealand through the remainder of that same year. 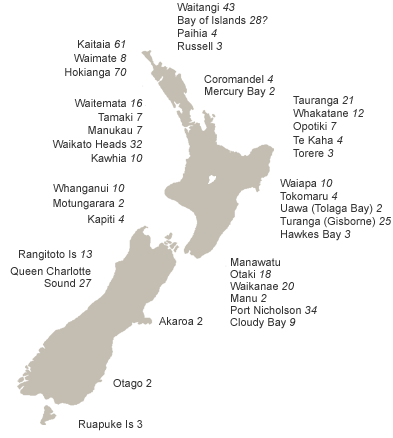 This map shows the locations of each signing of the Treaty of Waitangi, and the approximate numbers of signatories at each location.

There were two official versions of the Treaty, which included three articles – one in te reo Māori and one in English. Interestingly, but perhaps not surprisingly, Māori signatories only put their mark on the Māori text, whereas Crown representatives signed the English text. 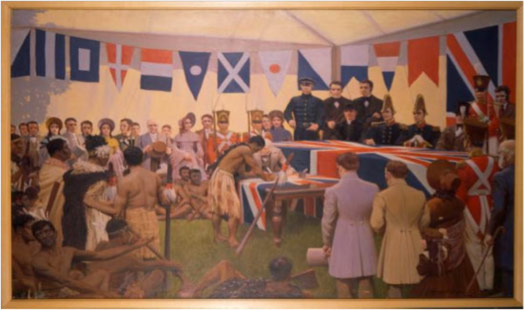 Articles of the Treaty

The Chiefs of the Confederation, and all these chiefs who have not joined in that Confederation give up to the Queen of England for ever all the Governorship (Kawanatanga) of their lands.

Article one provides for the Government to govern, though not in isolation from other provisions of the Treaty of Waitangi. The right to govern is qualified by an obligation to protect Māori interests. This aspect of the agreement is further established within the other articles of the Treaty.

The Queen of England agrees and consents (to Give) to the Chiefs, hapus, and all the people of New Zealand, the full chieftainship (rangatiratanga) of their lands, their villages and all their possessions (taonga: everything that is held precious) but the Chiefs give to the Queen the purchasing of those pieces of land which the owner is willing to sell, subject to the arranging of payment which will be agreed to by them and the purchaser who will be appointed by the Queen for the purpose of buying for her.

This is the arrangement for the consent to the governorship of the Queen. The Queen will protect all the Māori people of New Zealand, and give them all the same rights as those of the people of England.

Article three contains a provision which guarantees equality between Māori individuals and other New Zealanders. As long as socio-economic disparities remain, the provision is not fulfilled.

Te Tiriti within the context of the University of Otago

The University signed a Memorandum of Understanding (MoU) with Ngāi Tahu in 2001. Both Te Rūnanga o Ngāi Tahu, as the Treaty partner, and the University agreed that the purpose of the MoU was to establish a protocol that gave effect to a Treaty of Waitangi based partnership. The MoU was signed to give effect to Ngāi Tahu's aspirations whilst allowing the University to also realise its Treaty obligations.

Both parties recognised that the University extends beyond the Ngāi Tahu takiwā (tribal area) and memoranda with a number of other iwi are either in place or currently being negotiated. These relationships are the foundation of the University's Treaty responsiveness.

The University’s commitment to Māori development is articulated in the Māori Strategic Framework 2022, which serves as an ‘anchor’ for staff and students alike. The vision within this framework is reflected in the following whakatauki, which also reflects the University of Otago’s pursuit of excellence.

Pursue that which you treasure the most; should you falter, let it be only to a lofty mountain

Otago’s mission is to be a vibrant contributor to Māori development and the realisation of Māori aspirations, which will be brought about through the achievement of six key goals over the next few years, that is:

Continue the ongoing commitment to the University’s Tiriti o Waitangi partner – Ngāi Tahu – and other iwi with which it may enter into a formal partnership.

Develop quality research that contributes to the understanding of Te Ao Māori and the achievement of Māori development aspirations and the knowledge economy.

Increase the recruitment, access, participation, retention, development and success of Māori staff and students at the University of Otago.

Promote and support te reo me ngā tikanga Māori among staff and students on campus.

A recent review of the implementation of the MSF shows that – to date – it has clearly provided a much needed, coordinated and strategic ‘map’ for Māori development at the University Otago. Leadership is visible across many areas of the University and numerous projects, initiatives and success stories have occurred either as a result of or subsequent to the MSF’s implementation in 2007.

Otago continues to have a steady increase in the number of Māori student enrolments and ranks top amongst New Zealand universities for the percentage of Māori students successfully completing their qualifications.

As a result of this review, it is evident that the MSF continues to have a vastly positive effect on the University’s environment, benefiting both students and staff alike.

In June 2005, the University of Otago commissioned a stocktake to establish the University’s current position with regard to its Treaty of Waitangi obligations, aspirations and responsiveness.

To provide a context for this stocktake, a review of documentation pertaining to the University’s Treaty of Waitangi expectations was conducted. This included external expectations as outlined in the Government’s Tertiary Education Strategy (2002 – 2007), Te Manawa Tītī – Ngāi Tahu Tertiary Education Strategy and the Memorandum of Understanding (MoU) with Ngāi Tahu, and internal expectations as summarised in the University Charter and Profile.

As a result of this review, the University’s Treaty expectations were summarised as:

The Treaty of Waitangi Stocktake provided a retrospective picture and solid baseline for the University in terms of progress made in this area over the past five years, and consequently, laid the foundation for the development of the University of Otago’s Māori Strategic Framework which was launched in 2007.

The Higher Education Development Centre at the University of Otago offers two professional development workshops which focus on the Treaty of Waitangi:

Please refer to the Higher Education Development Centre (HEDC) for information about when these workshops are held throughout the academic year.