Our tauira have access to two experienced counsellors who provide free confidential advice and guidance. 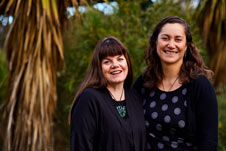 Vicky Totoro (Ngāti Porou) studied Education, Māori Studies and Psychology for her Bachelor of Arts. While doing postgraduate work she established tutorials aimed at providing a place for students to discuss issues from their experiences as Māori. This programme was incorporated into the Māori Centre when it opened.

Vicky also co-ordinated the Centre’s student tutorials and, after subsequent roles at the Ministry of Education, she returned to do counselling and pastoral care.

“Not all young people cope well with change and independence so it is important that whānau prepare them before they get here.

“We all need support. Have that conversation so that students know their limits … and so that they know to get help early if they need it.”

Kiritapu Murray’s (Kāi Tahu) background includes working with young people and helping them deal with trauma. She has raised her own family, who are now all adults, and feels much aroha for students as she is on her own postgraduate study journey.

“I encourage all tauira to come in for a quick hui with Vicky, Wayne or myself when you start at Otago, or if you haven’t engaged before – nau mai!

“Building a relationship with you means we can support you better when you need it in the future, with whatever is getting in the way of you living your best life at Otago – this can be anything from homesickness or struggling with study, to making new connections.”

Kiritapu is often accompanied by a co-therapist – her French bulldog Digby Jones.